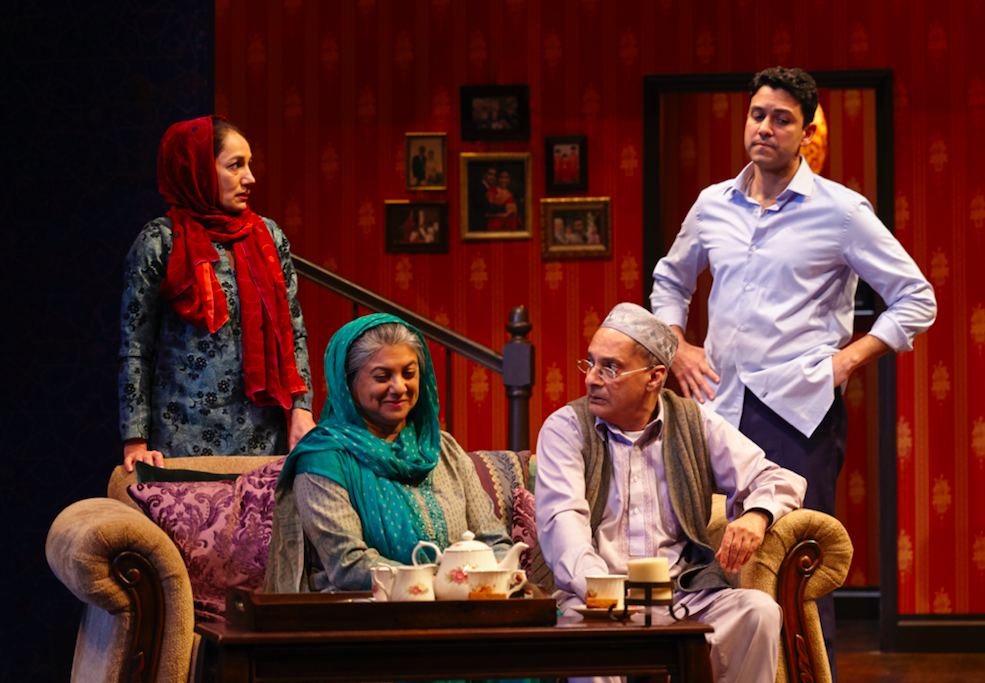 How Muslim is too Muslim, in the confusingly intolerant world, struggling between the conservative right and liberals? The debut play of the Columbia graduate Hammaad Chaudry tries to find the ordinary Muslim who is constantly struggling to find his ground between blending in and losing himself or standing out and be discriminated against.

“An Ordinary Muslim,” currently playing at the New York Theatre Workshop till March 25th, tells the story of Azeem Bhatti and his wife, Saima Khan, as they steer through the convoluted clash of their Pakistani heritage and contemporary British culture.

As the playwright himself said that the point of the play is that there is no ordinary stereotypical Muslim, he says, “Out of the eight characters, seven are Muslim. All seven are practicing. All seven express and embody a different kind of Islam.”

The play’s lead Azeem Bhatti played by the talented Sanjit De Silva, is up for a promotion at a bank in London. Though his parents are from Pakistan, he barely speaks Urdu. He has tried his best to blend in with the contemporary British culture. Whereas, his wife Saima Khan, performed by Purva Bedi, is also up for promotion, but chooses to embrace her heritage by openly wearing the hijab at work and home.  But she is met with the inevitable bigoted response from racists people. It is then that even, Azeem tells her it’s her fault for dressing “like an Algerian asylum seeker.”

The play goes on to show the struggles of Azeem’s father Akeel (Ranjit Chaudhry), who was forced to leave his home and country during the 1947 India-Pakistan partition. He spent all his wealth to bring his family of immigrants to  England and start afresh. He toiled as a laborer and struggled so that his children did not have to do the same. He gave up everything and lost most of his heritage. He took all his frustrations out in the form of abuse and violence on his wife Malika (Rita Wolf) and she, in turn, vented hers on their daughter, Javeria (Angel Desai). The children, even as adults are stunned into terrified silence when the Akeel again abuses Malika.

Each character’s feelings are met with an outburst when confronted by the reality of their situations. There is no right way to be a Muslim as endoctrined, it seems.

Hammad’s work highlights the struggle only the immigrants can relate to. They have given up a lot for a better tomorrow, but seem to be at a loss of self and internal fight.

The audience is pulled into the narrative of the relatable family and is captivated.  We are reminded of the struggles faced by our own families and can’t help but imagine having the same conversations.

Both the leads deserve special mention as Sanjit’s Azeem becomes resentful and paranoid for appearing too “Muslim” on the one hand, and Purva’s Saima is portrayed embracing her Muslim heritage with ingenuousness.  Their portrayal as husband and wife trying to make things work and finding a balance is so beautifully shown.

The play gets 4.5 stars out of 5. It was funny, emotional, and overall remarkable. The audience for the show was a mixed bag of primarily non-South Asians, and yet, they too gave it a well deserved standing ovation.