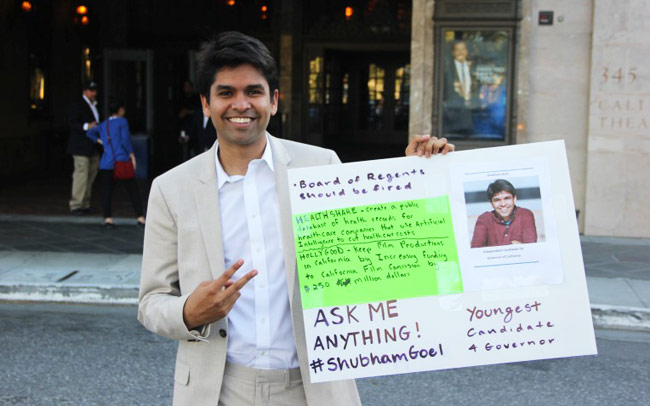 Sometimes conquering dreams seem impossible at first, then we think it is dubious to achieve that dream, but virtually nothing is impossible if you just put your mind and maintain a positive attitude to it, then the dreams become inevitable. And this positive attitude has led a 22-year-old, Indian-American lad, Shubham Goel to become the youngest candidate for the upcoming Governor elections in California succeeding Democrat Governor Jerry Brown. 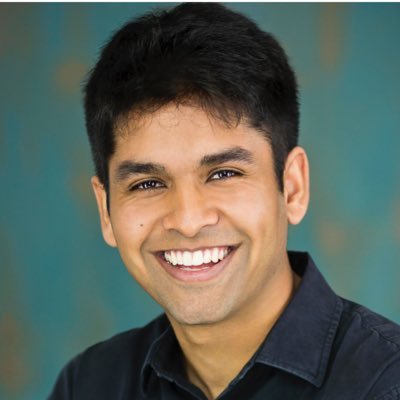 At the age where people think about rejoicing their college life and aim for a decent job, Shubham is eying to run in the election and become the youngest governor of California. He is a graduate of the University of California with a major in economics and minor in film studies. He is also a virtual reality manager by profession. Shubham’s parents Karuna and Vipin Goel hails from Uttar Pradesh, and shifted to the US and raised Shubham in Danville, California

Shubham Goel is taking up public places as his platform – like streets and parks and talks to people with his megaphone, explaining about his run for governor.

Speaking to people on the Santa Monica Pier about my candidacy for Governor of California! My solution of GovBook, transparent & digitalized Profiles for all Office holders in California, will be an effective solution at combating corruption.#TheGoeldRush #VirtualRealityManager pic.twitter.com/zwoyC9HjaH

He posted few videos on Twitter expressing himself on how he wants to bring a change in California and improve the transparency between government and public. Shubham Goel tells people that one doesn’t need any political backing or heavy funds to run for the elections, “I only want to show, that all you need is efficiency, platforms, and convictions.” He aims to digitalize profiles of government officials, which can expose their money transactions of past ten years to maintain transparency.

Shubham is not the first Indian-American to aim for Governor’s office. In 2008, Bobby Jindal became the Governor of Louisiana, and Nikki Haley was the Governor of South Carolina from 2011-2017.

Taking this electoral plunge Shubham believes that he is the first to campaign via virtual reality and use this platform to fix issues. He focuses on using technology in politics which can bridge the gap between government and public. “Virtual reality should be implemented in our education system and is a better tool for youth to learn.” He believes that many virtual reality techies are ignored by the political system and some innovators do not pay heed to politics and use their mind in it.

Goel is competing against 22 candidates for the Governor of CA, which will be held on June 5th, tomorrow. His slogan for the campaign is ‘The Goeld Rush’, “people don’t have to be rich, well connected or D-list celebrity or good looking to run for election and make a difference.” he posted on Twitter.

California needs technological and innovative solutions for its stagnant issues. This is why I have decided to run as the youngest candidate at 22 for governor of CA and how my job as a virtual reality manager will help me harness feasible platforms for the state #TheGoeldRush https://t.co/ryA5cxcPog

He also mentions that there is no political affiliation or funds or no campaign team backing him up.

As per his beliefs, both the parties ‘Repulican’ and ‘Democrat’ are flawed as they just stick to their talking points and are running out of innovative solutions. He says he has seen his state suffer and wants to bring innovations which can implement feasible solutions to problems. He mentions in one of his interviews that he wants to raise representation and awareness for the Indian community in decision making.

California needs everyday people and not people with loads of money/fame. Please see why I decided to run as the youngest candidate for governor of california and why my profession as a virtual reality manager will help me enact feasible and practical solutions. #ShubhamGoel https://t.co/RbALk1xmVY

We wish you all the best!