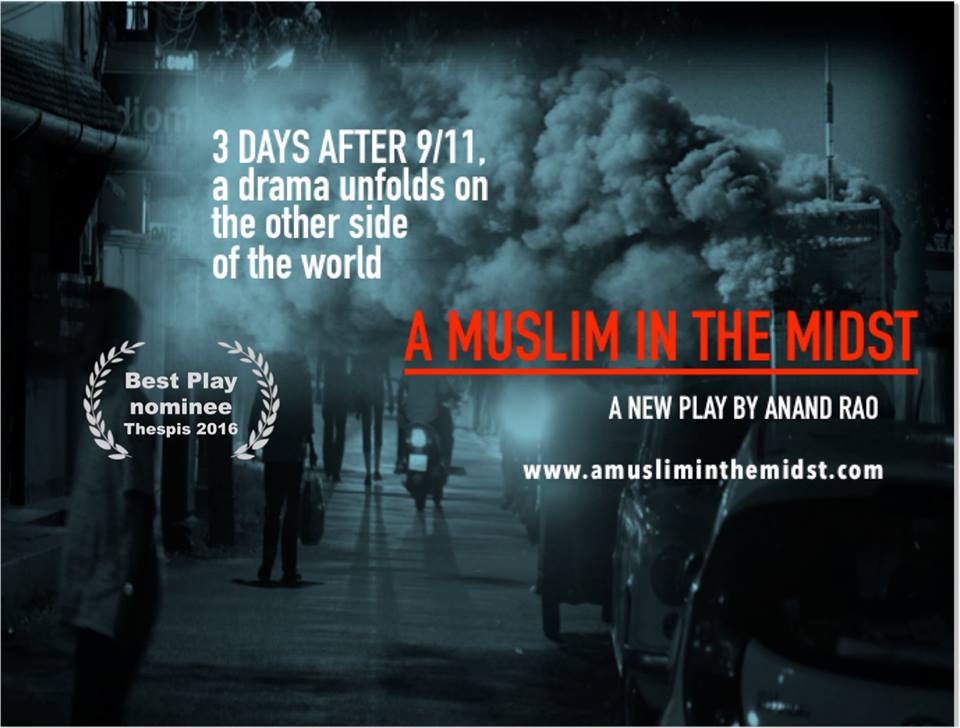 Brave New World Repertory Theatre, the Brooklyn-based theatre company that first won acclaim staging To Kill A Mockingbird on the front porches of Victorian Flatbush in 2005, is pleased to present Anand Rao’s A Muslim in the Midst in a full production November 1-17 at the Actors Fund Art Center, 160 Schermerhorn Street, Brooklyn. 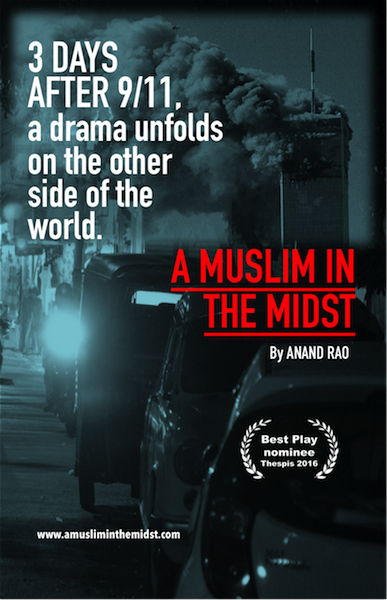 Brave New World Rep’s mission to examine issues of social justice first attracted the company to Anand Rao’s play for their 2018 BNWorks Series in January 2018. The post-reading talkback between audience and the playwright/cast lasted for 45 minutes, prompting artistic director Claire Beckman to include a 10-performance run this November as a kick off of BNW’s 2018/19 season. 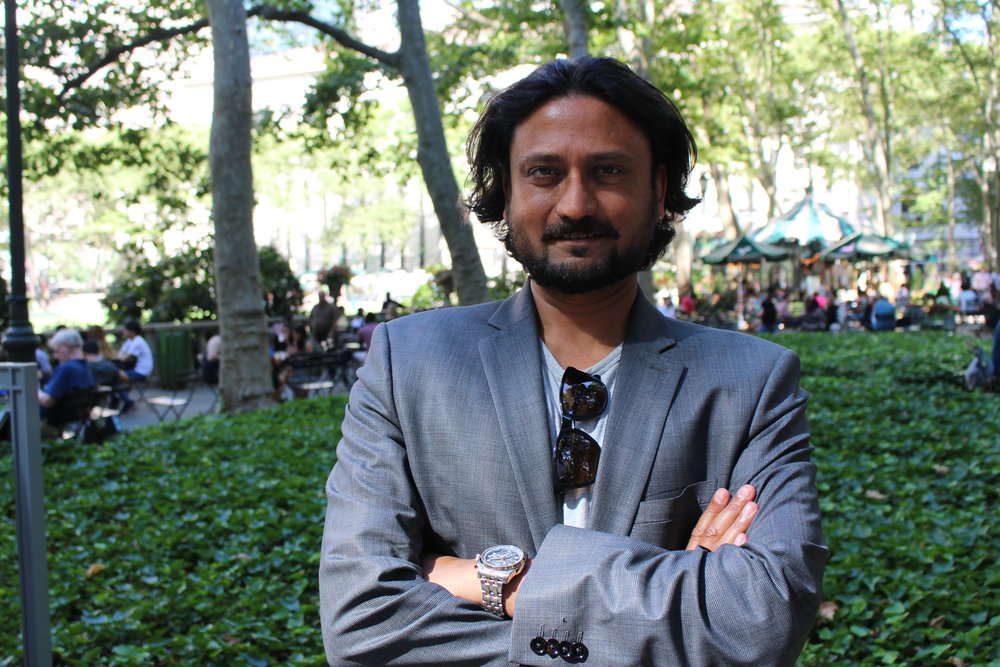 Playwright Rao got the idea for A Muslim in the Midst in Bangalore when he offered a ride in his car to a family of complete strangers stranded on the sidewalk late in the night. The play is the dramatization of those events, which Rao describes as “quiet and uneventful during – but volatile and uncommon in hindsight.” A play about 9/11 and its impact on distant societies from an outsider’s perspective, A Muslim in the Midst puts into focus the issues around class consciousness, social and educational inequality, gender equality, modern medicine, and perceptions around politics and religion. 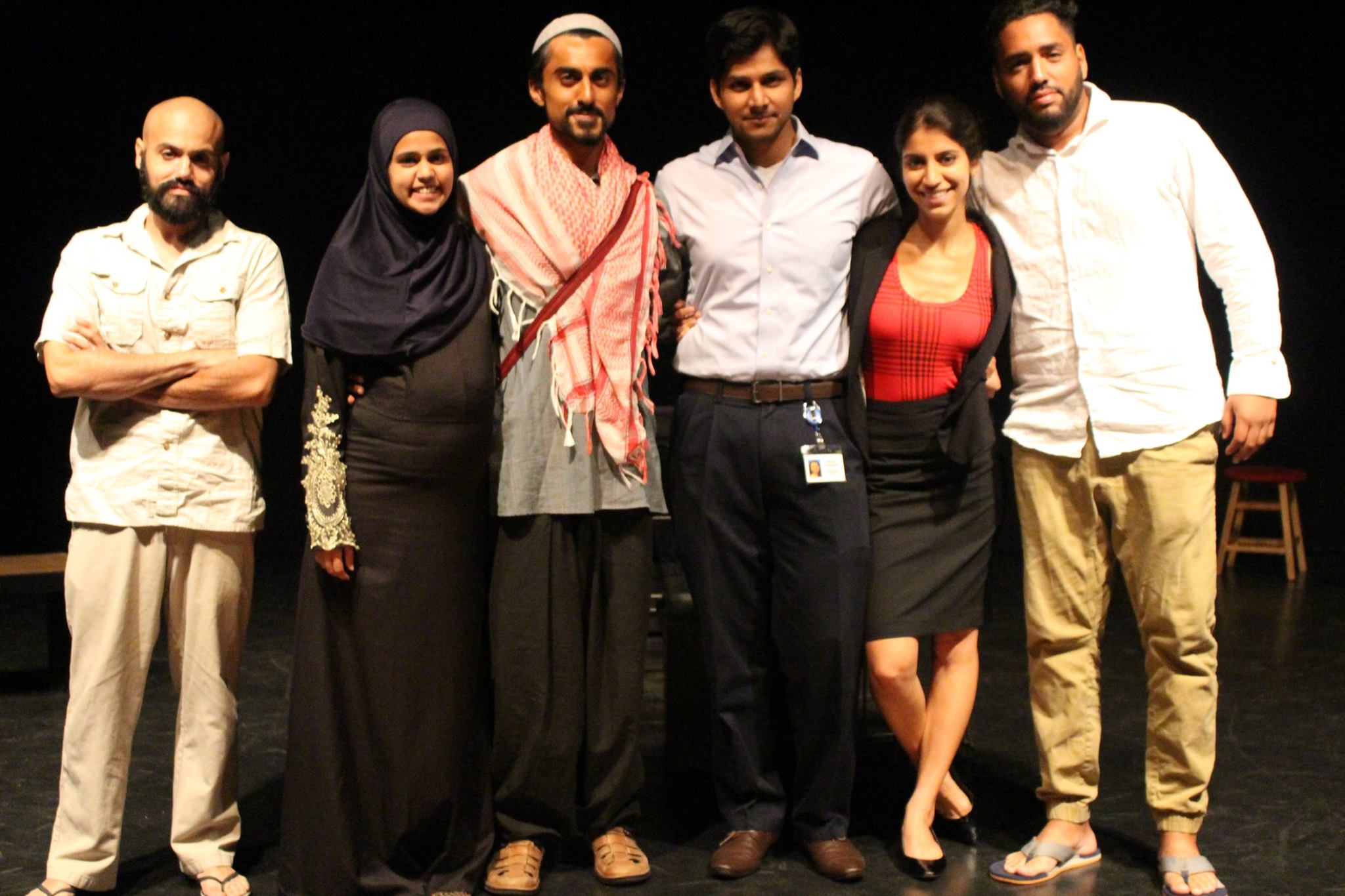 Says Beckman, who is directing the production, “In much the same way that BNW created historical distance from which to examine the power struggle between Black and White Americans through the lens of Chekhov’s The Cherry Orchard set in post-slavery Reconstruction (The Plantation), A Muslim In the Midst creates geographical distance with a post 9/11 story set in the playwright’s hometown of Bangalore, India.” 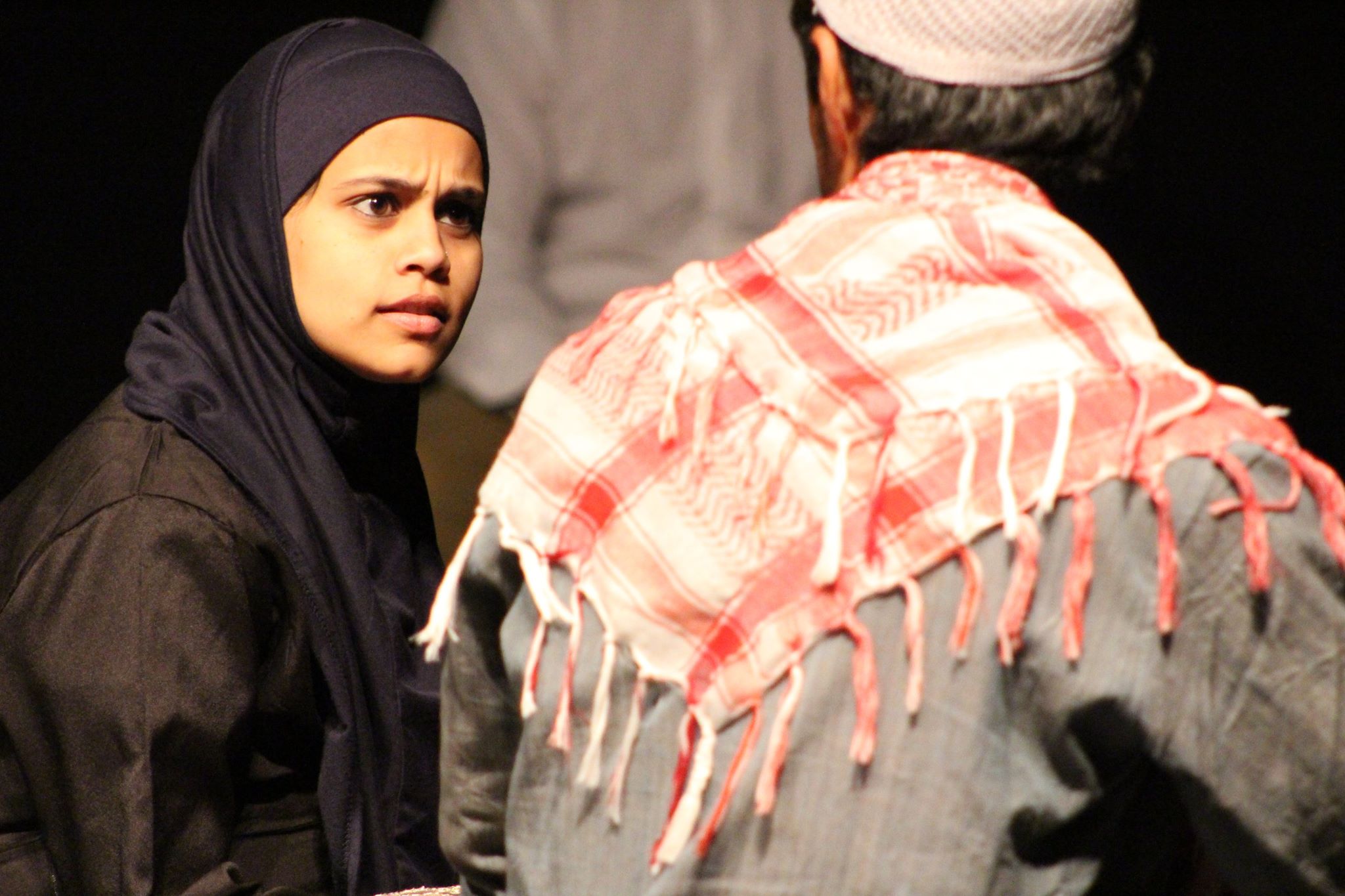 A MUSLIM IN THE MIDST

SYNOPSIS/A Muslim in the Midst 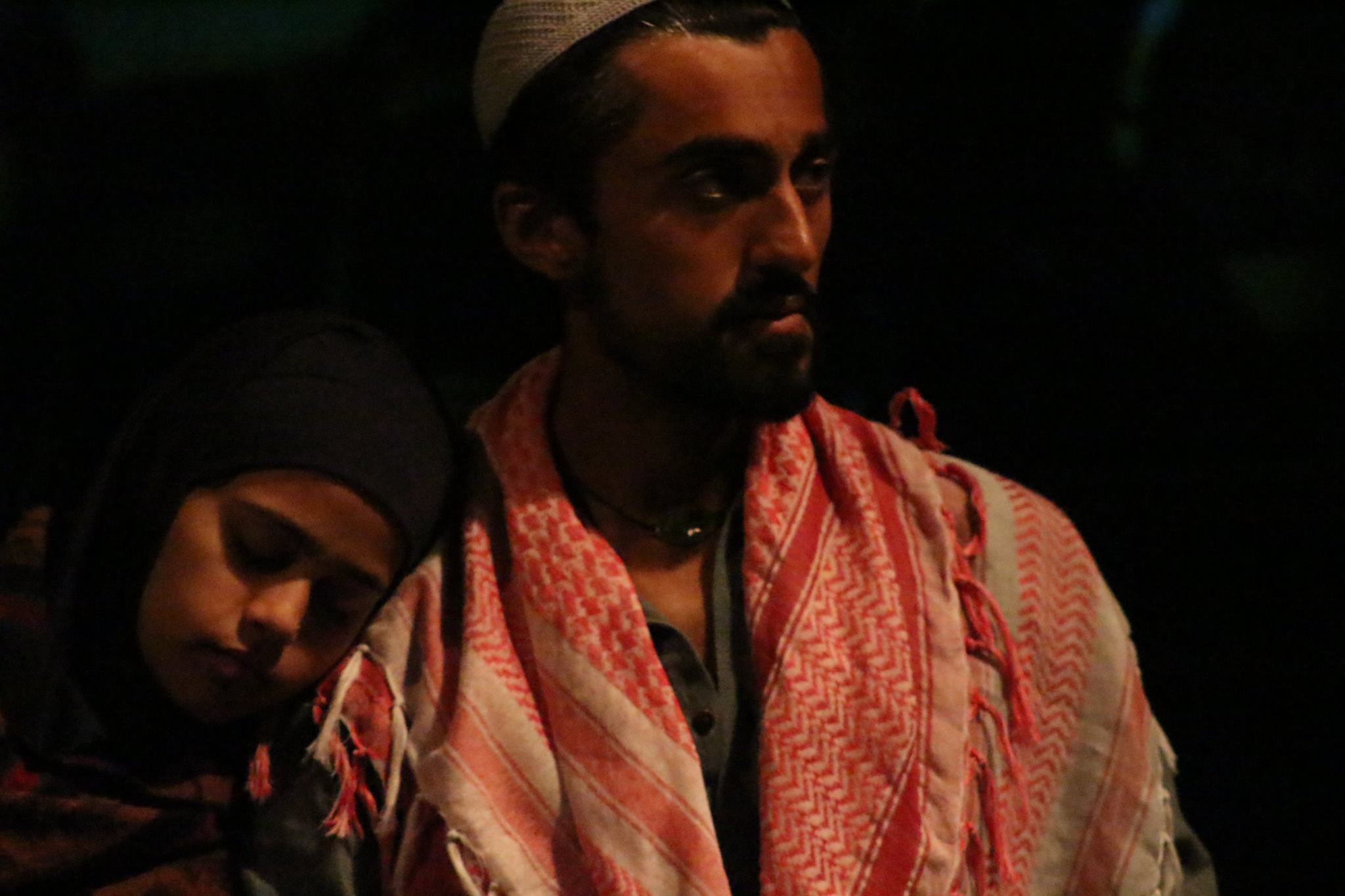 September 14, 2001: On the streets of Bangalore, India, a poor Muslim family is stranded. Desperate to reach a relative’s home in a distant suburb, the new immigrants to the city are struggling to find a ride late in the night. Watching them closely is a Hindu couple, both executives of American companies. The liberal and westernized executive couple offer to take the traditional and rural Muslim couple along. The conversation quickly takes an unexpected turn as the two worlds collide. Fueled by a pro and anti-Islamic rhetoric, and warnings about potential terror threats intermittently playing on the radio, the characters fight within their self-imposed confines of prejudice and fear, in their attempts to look beyond the obvious ideological differences, and unravel a common fellowship based on humanity.

A Muslim in the Midst has been performed at New York’s Hudson Guild Theater (2016) to sold-out shows and was nominated for the Best Play/Musical award at that year’s Thespis Summerfest. It also was performed at the South Asian Theater Festival at the Rutgers University’s Victoria Mastrobuono Theatre, Mason Gross School for Performing Arts (2017) and at Yale University’s Crescent Theatre, New Haven, CT. 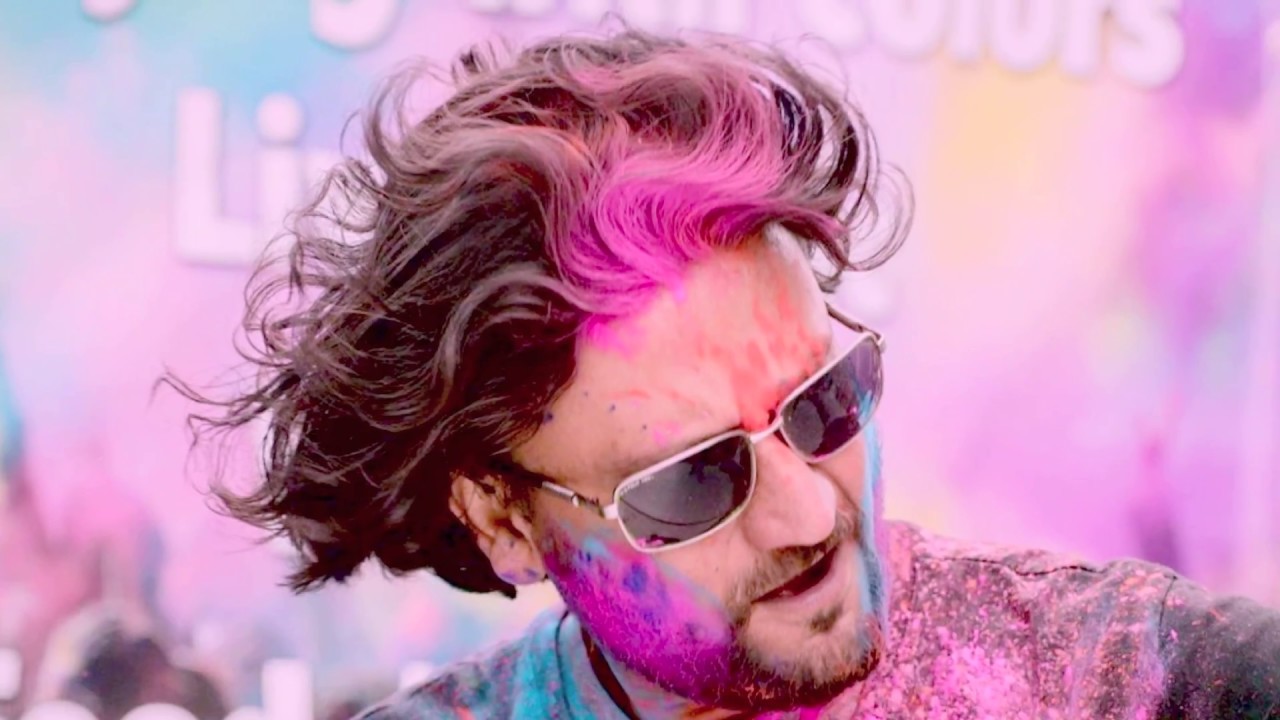 A bi-lingual writer, actor, director, a part-time academic and management consultant; Anand’s professional career spans a wide range of fields from advertising creative and journalism to corporate communications, organizational development, and higher education.  Born and raised in Bangalore, India, he has played prominent roles in over 50 theater productions in English and his native language Kannada. As a television actor, he was seen in daily soaps on regional television in Kannada with popular award-winning directors. Living in various states of the US for over 11 years now, he has worked closely with many multi-ethnic performing arts groups in Utah, Illinois, New York, and New Jersey, acting and directing in regional theatre, hosting events, training children, writing scripts and offering strategic advice to individuals and companies. He is the creator and host of Nammerica, a New York-based web-series talk show in Kannada. Recently, he acted as Kamal in The Music in my Blood at New York’s American Theatre for Actors. His other writing credits include ‘Deadlock’, a dialogue between faith and science, and the ‘The Spice Trail Scrolls’ a musical based on Panchatantra, the ancient Indian collection of fables. His works in progress include three short and two feature films. Anand has an M.B.A. from the Westminster College, and Graduate Certificate in Integrated Marketing Communications from the University of Utah, in addition to M.A., in English Literature, and advanced studies in journalism and public relations from Universities in India.

For the past 13 years, Brooklyn’s Brave New World Rep has carved out a site-specific niche presenting re-envisioned classics and works by Brooklyn playwrights. Recent work includes Arthur Miller’s A View From the Bridge presented on a barge in Red Hook; The Plantation, an immersive adaptation of Chekhov’s The Cherry Orchard transformed into a post-Civil War story set in Virginia that was performed in The Commanding Officer’s House on Governors Island and free performances of Elmer Rice’s Street Scene, where the company closed off a street in Park Slope and used a tenement building and adjacent street as the stage.

The company earned a reputation of delivering unexpectedly immersive works to communities all around Brooklyn, beginning with its 2005 production of To Kill a Mockingbird, presented on the front porches and sidewalks of a tree-lined Ditmas Park street. Other work includes On The Waterfront on a Brooklyn barge that toured the waterfronts of New York Bay, The Tempest on the beach and boardwalk in Coney Island, and The Crucible by lantern light for two weeks at The Old Stone House in Park Slope. Based in Brooklyn, Brave New World Repertory has been a featured favorite of Celebrate Brooklyn at the Prospect Park band shell, presenting acclaimed productions of Fahrenheit 451, The Great White Hope and Crossing Brooklyn Ferry, based on Walt Whitman’s Leaves of Grass. http://www.bravenewworldrep.org

Tune In Tuesdays – Juggy D ft. Rishi Rich & IKKA ‘Get Down’ To Business