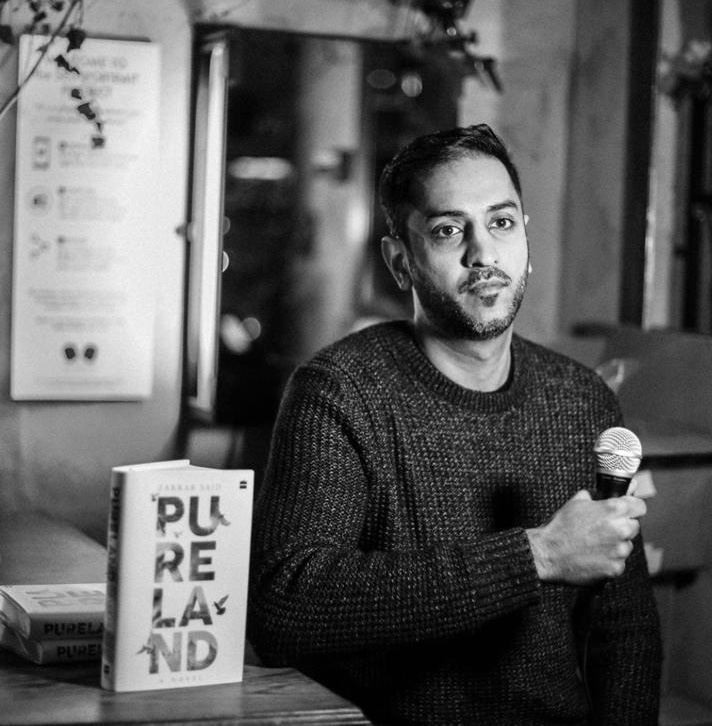 In an exclusive interview, we take a look behind Said’s book that takes elements from Salam’s life with a touch of magical realism to create a moving story.

“Pureland” is described as “a tour-de-force novel about a nation that has lost its way.” Taking on this task has been difficult for Said but he did not write this book for himself, it was a story that was waiting to be told. The author’s debut novel is already being compared to the work of talented writers like Salman Rushdie and Mohsin Hamid.

Interestingly, “Pureland” is narrated from the perspective of an assassin who has just murdered Dr. Salim Agha, the character inspired by Salam. The assassin explains his motive for killing Agha by tracing the life of Agha. Like the Salam, Agha is a child prodigy, a scientific genius who went on to become a  Nobel Prize-winning physicist from the forgotten nation known as Pureland.

“[‘Pureland’] is a true story about a young boy who was born in an utterly rundown village back in the 1920s and 30s and who went on to win the Nobel prize in Physics,” Said revealed.  “It is very important, especially in this time, this age to tell these stories.”

The magical realism in the story is visible throughout from the levitating saint to the witch-like mother. Said has even incorporated a love story amid the political aspects of the story between Agha and Laila Khan.

Said believes that what drew him towards the life of Salam was the fact that “Not only was he one of his kind but also, he came from a very sect of Islam, the Ahmadi sect, which is one of the most persecuted sects in the world right now.”

Salam is known as the father of mathematical and theoretical physics in Pakistan but as an Ahmadi Muslim, he could not remain in his beloved country when Ahmadiyya Muslims were declared non-Muslims by law in the 1970s. It is shocking to know that even today when a child born in Pakistan turns 18, he or she has to sign an affidavit stating that they believe Ahmadi’s are heretics and imposters.

Said’s in the life of Dr. Abdus Salam grew from his passion for science.
“I was a science major; I was intrigued by these things. I found it fascinating that I had to leave the country of my birth to learn about such a formidable figure in the world of science. There is not a single street named after him in Pakistan.

did Said not make it a non-fiction book on the life of Salam?

“It started off as a non-fiction,” the author revealed, “but because there were such mystical and magical elements in the life of this man, there was no way I could have made it a non-fiction book; people would not have taken it seriously. For example, it seems unbelievable that Salam, who never got to see an electric light bulb until the age of 15, changed the way we look at electricity!”

Said feels that he owes a lot to writers like Salman Rushdie and Arundhati Roy, but unlike Rushdie, he does not want to write sentences that are pages long.

With “Pureland,” Said wanted to make sure his writing was relevant and easy to comprehend for the average reader because it has an important message for humanity.

“Cultures will suffer from the prejudices that they keep. One example is Germany losing Einstein to antisemitism. MF Hussain spent the last years of his life in exile because of Hindu fundamentalists who wanted to slay him. In the same way, Pakistan lost out on Abdus Salam’s achievements.”

“Pureland” is Said’s first attempt at fiction. Surprisingly, he almost gave up halfway because he met with multiple obstacles including rejections. He even tried dupe himself into writing something else. However, he just couldn’t let the story go for which we are thankful.

We hope “Pureland” succeeds in taking the message to the world through the moving story of a man who had to spend his whole life in exile loving a nation that didn’t love him back.