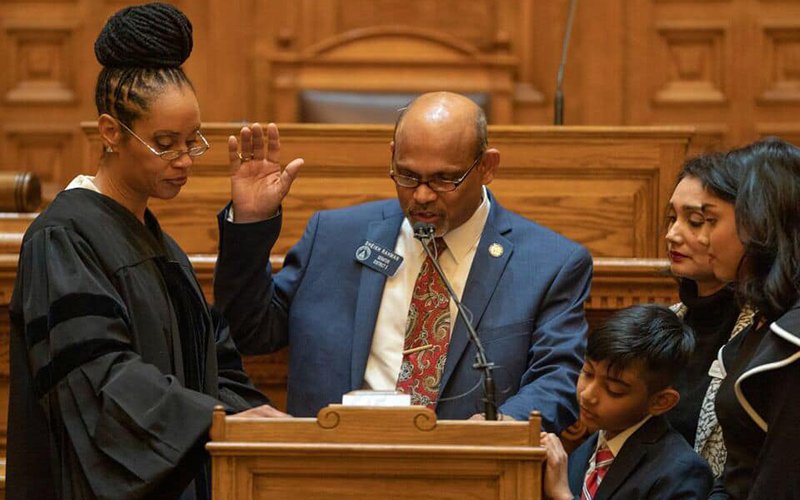 The 30 days government shutdown by the Trump Administration is the longest one in the US history. On one hand, the US economy suffers and over 800,000 government employees are not getting paid, while on the other hand, the President is still trying to leverage the situation into getting funding for his redundant southern border wall.

With an administration which is blindly disregarding the immigrants and building policies to basically keep them out of the US, it is difficult for immigrants to feel safe. The administration has found cruel ways of deterring them – like separation of families at the border.

Therefore, in times like these when immigrants get a voice of recognition like that of Senator Sheikh Rahman of the Democratic Party, it rings in a big win.

Last week, he became the first Muslim  immigrant  to be sworn into the Georgia Senate!

Rahman came from an affluent political family in Bangladesh and was captured as a prisoner of war in the 1971 Liberation War of Independence. He finished his high school before coming to the to attend Central Piedmont Community College. Born in affluence, Rahman’s humble beginnings in started from a North Carolina restaurant where he worked as a dishwasher to help pay for college and improve his .

Facing xenophobia and racism, Rahman became a US citizen in 1995 after working hard for 14 years. He persevered from a dishwasher to become a manager at Pizza Hut and eventually a corporate executive. He completed the undergraduate degree in Economics & Global Studies at the University of Georgia, where he was elected as Student Senator and President of the Global Studies Association.

He had worked on many political campaigns right from his college days. It was only after seeing President Barack Obama, that he dared venture into politics himself. He became immensely involved in politics and joined the NAACP, National Action Network, American Civil Liberties Union (ACLU), and the Democratic Party of Georgia.  He also served as an active member of the Labor, Asian-American, and LGBT caucuses. He is a SuperDelegate for the State of Georgia and also serves as an advisor to the Alliance of South Asian American Labor.

Rahman’s appointment as a Senator is a lesson for countless wide-eyed immigrants who want to live the American dream. He came from wealth, lost it all in war and came to the with minimum. He worked his way up to not only improve his English and fit but also fight for the little people by joining politics.

Rahman is the living embodiment of what immigrants can offer to US, if they are given the right opportunities. He earned his way through sheer hard work and dedication, and was rewarded for the same. It was the liberal immigration policies which welcomed everyone with open arms and gave immigrants a fresh start.

No one wants to leave their own country to become a second-grade citizen in another country. It is the unspeakable atrocities that make people leave everything behind and seek a fresh start in a strange country where everything from the language to culture, politics, rights are new and difficult.

We hope that with people like Senator Rahman, there is a new voice to fight for immigrants’ rights.