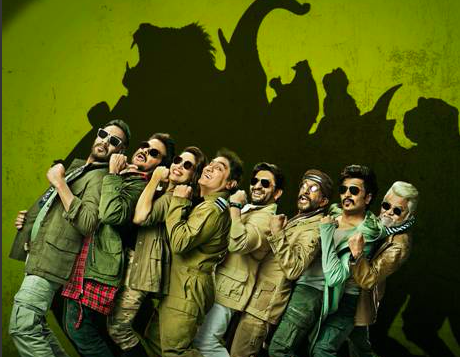 And the madness & the craziness of the biggest franchise of laughter continues. “Total Dhamaal” is a mad adventure comedy about money. Guddu (Ajay Devgn), a small-time crook gets double-crossed by his own colleague, Pintu (Manoj Pahwa), after they have managed to get their hands on an illegal booty. Guddu & his sidekick Johnny (Sanjay Misra) manage to trace his colleague but only after Pintu has given the information of the booty to 3 other groups i.e. Avinash (Anil Kapoor) & Bindu (Madhuri Dixit Nene) – a bickering couple about to be divorced; Lallan (Riteish Deshmukh) & Jhingur (Pitobash Tripathy) – Fire Officers turned offenders & two weird siblings Aditya (Arshad Warsi) & Manav (Javed Jaffrey).

All of them refuse Guddu’s offer to distribute the money and the race to reach the booty first begins. Finally, after many ups & downs, all reach the designated place. But it’s not as easy as it seems. Is there any truth about the hidden booty? Or all of them are being fooled? After a day full of life-changing, near-death experiences, will the adventure ever end or another one begin? Find out how the story concludes and if they are able to get the booty or not!

Check out the trailer here!