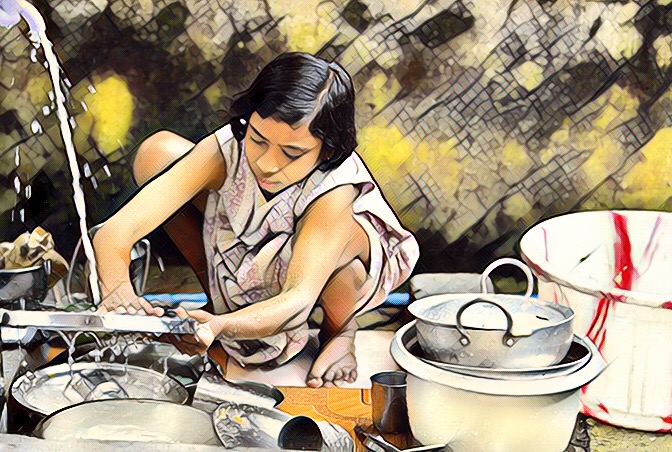 The issue of human rights and child labor have surfaced once again and this time it’s from Pakistan. In one part of the world, where people are talking about taking immediate measures to prohibit child labor at all costs, seems like this South Asian nation has found another reason for being infamous.

In Lahore, a 16-year-old girl – Uzma – who was working as a maid, was heartlessly slain and discarded into a drain by her employers. Her fault – she took a bit of food from their daughter’s plate.

The entire country and the world is shocked by this inhumane act and is demanding #JusticeForUzma. She was a minor and had been working for this family for almost 8 months. She was underpaid, underfed and also not allowed to meet her family. At times, she used to go to the neighbors to beg for food as her employers did not give her proper meals. She was made to sleep in the bathroom. Living in such hostile conditions was already too much for her and she ultimately paid a heavy price for her poverty.

A large number of children around the globe are caught in the web of child labor, denying them of their childhood, wellbeing, and education. These children mostly work to help their families make ends meet. However, numerous children are stuck in exploitative working conditions.

As per the global estimates, there are about 168 million kids who are within the age bracket of 5-17 years engaged in child labor. This goes on to the extent of including slavery and practices such as bonded and forced labor and sexual misuse, or other unlawful practices, which also include drug trafficking.

Child labor is not restricted to only domestic services but to domains such as agriculture, mining, and manufacturing. But it is often concealed from people. It is the consolidated result of numerous variables, like the absence of good work opportunities for grown-ups and youth, relocation, financial crises, population, poverty.

Uzma’s father is a security guard and at an age when she should have been attending school, she was mistreated so badly that it led to her death. The woman and her daughter, who used to frequently beat her mercilessly, have been arrested. They accused Uzma of theft and also had the audacity to call her family to the police station in order to complain of Uzma’s so called stealing.

It is high time people start considering others as humans and not commodities. There are many Uzmas out there who are suffering at the hands of such ruthless and heartless people with the power of money.

We hope the call for #JusticeForUzma will bring another revolution in #NayaPakistan.