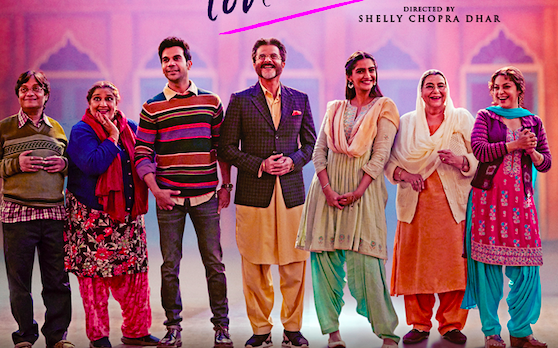 Contrary to the title, the highly anticipated film comes off as less of a love story but more a comedy with dramatic moments that move you with its rawness. It is a take on father-daughter relationships, self-acceptance and most importantly, self-love. It all boils down to the message that many Bollywood films with a social message today emphasize, don’t live your life according to “log kya kahenge,” always follow your heart.

The film is the first time that real-life father-daughter duo, Anil Kapoor and Sonam Kapoor Ahuja will be seen on screen together. Kapoor-Ahuja perfectly plays Sweety, a soft-spoken, caring young girl who is a gifted artist. Kapoor-Ahuja is so effortless it is easy to fall in love with her emotional portrayal. She holds her own against her legendary father who plays her reel-life father, Balbir Chaudhary, aka “the Mukesh Ambani of Moga” and owner of the town’s famous Chaudhary Garments company.

The story begins however with another character, Sahil Mirza, played by Rajkummar Rao, the son of a famous filmmaker who is trying to build his own reputation by writing plays for theater. However, he lacks inspiration, until he meets Sweety (Sonam Kapoor Ahuja). This love, at first sight, leads him to follow her from Delhi to the small town of Moga in Punjab where she is from. His trusty comedic sidekick, Chatru , played by Juhi Chawla, by his side. Chatru is a caterer for the theater company who has a passion for acting.

Upon arrival, he discovers that Sweety is under house arrest for being in love with a Muslim boy, which he mistakenly believes is him. Sahil is thrilled that the girl he is infatuated with cares for him as well but soon we discover the truth is much more complex than that.

So what is the truth?

Sweety is in love with a girl.

Sweety’s bother Babloo (Abhishek Duhan) is the only one aware of her sexuality and is constantly berating her trying to rid her of this “illness.”

The film lacks the suspense needed to build up to this discovery but the reveal isn’t meant to be a highly climatic moment. A drunk Sahil actually laughs at Sweety when she reveals the truth but between the laughs and family hijinks, Sahil and the audience learn of Sweety’s sorrow filled story.

She has struggled since her youth with her feelings and she learned at a young age that she must hide, she is “abnormal.” Her pain, self-hatred, and resigned attitude towards life is powerful and relatable. They speak of her suicidal thoughts briefly, which could have been a strong teachable moment if it was explored a few minutes longer.

The latter half of the film focuses on Sahil trying to help his new friend Sweety finally love herself, accept herself as “normal” and find the courage to take on her family and society.

The film takes on Sweety’s sexuality with much care and sensitivity which sets it apart from other Bollywood films that turn sexuality into crass jokes. Dhar has executed this story so brilliantly that even viewers who may have difficulty digesting the topic will be able to sit through the film and learn something new. Rao and Kapoor-Ahuja have an easy chemistry that is sweet.

The most moving moment being the play the characters conduct at the end of the film where Sweety’s internal emotions are on display and her father is moved to tears watching a young Sweety trapped in a glass box. Kapoor showed a strong range of emotions in this film as Balbir, but watching his confusion and emotional struggle over how to react to his daughter’s sexuality will bring tears to your eyes.

The most telling is how even until the last scene Babloo continues to hate his sister’s sexuality, because in real life there isn’t always a happily ever after, you can’t change everyone. Duhan does such a realistic job as Babloo you both love and hate him, he is a product of his environment.

As emotion heavy as the latter half of the film is, the first half is filled with a hilarious family dynamic which will have you chuckling throughout the movie. Balbir has a passion for cooking, which his mother, played by Madhumalti Kapoor, is always yelling him for. Balbir often sneaks into the kitchen, secretly watches cooking shows and cooking late at night to avoid getting caught by his mother. Brijendra Kala and Seema Pahwa play the servants at the Chaudhary house adding the right amount of comic relief throughout the film as they take bets. We can’t forget Chawla and Anil’s adorable romance that is just “” as Chatru says.