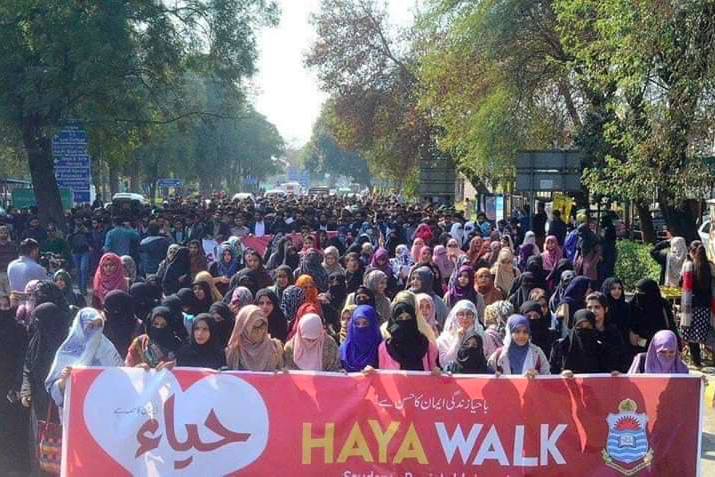 February 14th is celebrated as the day of love all over the world. However, as reported in MangoBaaz, to demonstrate their solidarity against the tradition of Valentine’s Day youth in Pakistan boycotted this day and celebrated Haya day instead. All these youth gathered and organized a Haya walk to support the modest values of their culture.

The campaign against love was also supported by the scandalous and ferocious student wing of the Islami Jamiat-e-Talaba, who had called for the Haya walk at the Punjab University campus in Lahore. Other than that, demonstrations were also staged at Buner and Bahawalpur areas of Pakistan.

In fact, even last year similar demonstrations were staged against Valentine’s day. This year even kids from various schools contributed to the activities of the “modesty day”.

The concept of Haya day arose to counter the Behayai caused by Valentine’s day. Many Muslim youth feel that celebrating Valentine’s day motivates unmarried people to celebrate their love and since this is more of a western custom which is prohibited by Islam, celebrating this event is just intolerable to them.

The psyche of Pakistan has seen major transformations in the past many years. Rather than staying in a mould, they have now started solving issues structurally and systematically which definitely encourages the trust that the youth has over the system.

But encouraging such demonstrations is surely proof of the existent conservative nature which continues from generation to generation. As the system proclaims to revolutionize Naya Pakistan, this takes several steps back in the move towards progress.

Hopefully things will improve sometime in the future.