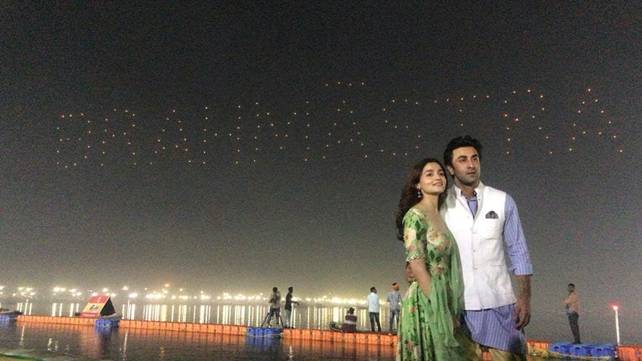 The most anticipated Bollywood epic of 2019, “Brahmastra”, became the first film ever to unveil its logo at Kumbh Mela in India and stars Alia Bhatt and Ranbir Kapoor plus director Ayan Mukerji were on hand for the exclusive reveal.

150 drones lit up the night sky to premiere the logo for the magnum opus which also stars Amitabh Bachchan and releases in theaters across North America this Christmas.

Apart from Ranbir and Alia, the film also stars Amitabh Bachchan, Mouni Roy, and Tollywood actor Nagarjuna. It is the first part of a sci-fi trilogy.

It was not just a poster release but something that was literally out of the world. On the occasion of Mahashivratri and culmination of the Ardh Kumbh Mela, the makers of Ranbir Kapoor and Alia Bhatt-starrer “Brahmastra” unveiled the logo of the film. The actors of the film had earlier shared cryptic messages piquing the curiosity of their fans by revealing that they have something special planned for the day.

Watch the logo for “Brahmastra” here kicking off the epic trilogy: