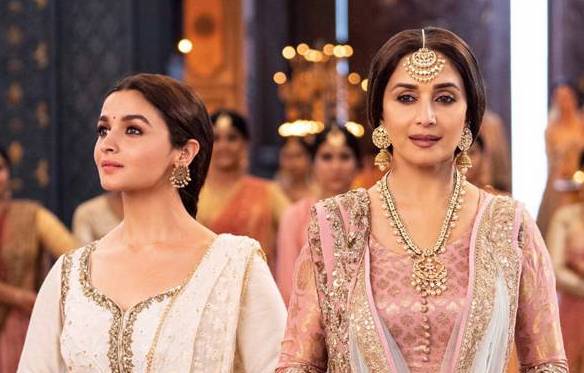 The first song has just premiered from the much-talked-about Bollywood epic “Kalank” which opens across North American theaters on Wednesday, April 17th, ahead of Easter. Madhuri Dixit, Alia Bhatt, and Varun Dhawan headline the new video from the Karan Johar production.

While Varun Dhawan is seen in the video, it is the Alia Bhatt-Madhuri Dixit combo that is the main attraction of the song. Pritam has composed music for Ghar More Pardesiyathat has been written by Amitabh Bhattacharya. Shreya Ghosal and Vaishali  have lent their voices for the song.

When it comes to dancing, and especially when it comes to Kathak, Madhuri Dixit is nonpareil and while some have braved the floor with her, very few have lived to tell the tale – most notably, Aishwarya Rai Bachchan who acquitted herself with honors in ‘Dola Re‘ from “Devdas”.

In ‘Ghar More Pardesiya’, no such dance-off has been attempted and Alia Bhatt has the floor to herself while Madhuri Dixit looks on admiringly.

Check out the song right here and get enthralled by the sheer magnificence of it!