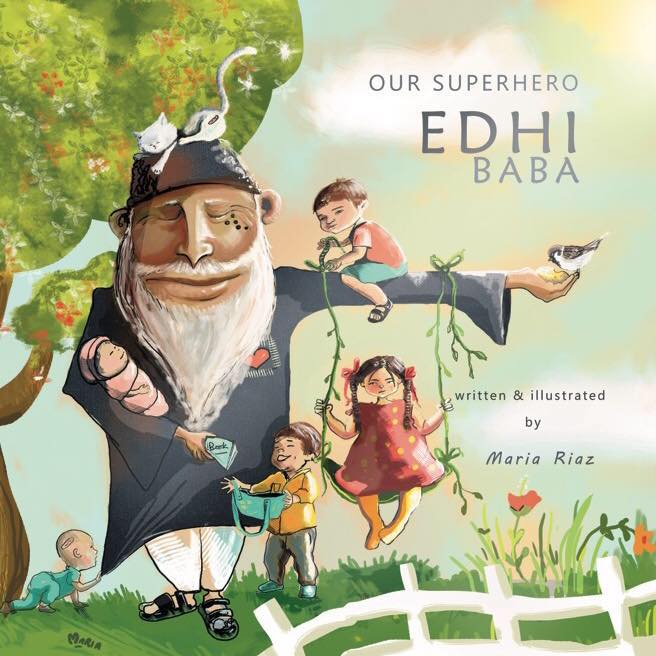 Abdul Sattar Edhi is Pakistan’s superhero, but kids nowadays either don’t know of him or have forgotten him. They are more inspired by western superheroes. However, a newly launched children’s book “Edhi Baba” aims to get children familiar with Pakistan’s long lost hero.

The book, concentrating on the life and work of the late altruist Abdul Sattar Edhi, has been written and illustrated by Maria Riaz Tauseef.

In an interview with SAMAA TV on its show, ‘Naya Din’ she said that Edhi is a national legend and in her book, she has displayed him as a superhuman whose super-power is enormous heartedness. The underlying belief is that by helping others one will end up becoming more generous and transform into a hero.

Wanting to turn into a social entrepreneur, Tauseef is trying to help herself just as much as giving to the Edhi Foundation with this book. The foundation has long been battling with shortage of funds and half of the profits of the book will go to it.

“Edhi Baba” believed that one need not be rich to give, people can donate their time and do voluntary work. Tauseef has not only attempted to highlight Edhi’s life but also wants to set an example for the younger generation by showcasing his teachings.

As per old records, Edhi had said that his mother guided him to share everything with others and gave credit for the Foundation to her lessons. Correspondingly, this book educates parents to imbibe similar qualities in their kids.

Despite the fact that this is a kids book, the writer believes that it is for everybody. A lesson for all to learn and practice.

You can place an order directly with the writer, Maria Tauseef for online home delivery.