A masked mob armed with iron rods, sticks, and sledgehammers went on a rampage for over two hours at the Jawaharlal Nehru University, in New Delhi, India on Sunday evening, leaving at least 34 students and teachers injured. The chilling and brutal visuals of the rampage will torment India’s conscience for a long time to come. The mob ransacked hostels and grievously wounded students, professors, and staff, going about it all in a methodical madness for several hours. Not a single attacker was detained by the Delhi police, deployed in large numbers just outside the campus. The street lights were turned off and the police personnel appeared to have given cover for the mob that leisurely walked away with abusive slogans.

India,where cows seem to receive more protection than students, is also a country that now refuses to be cowed down. You can’t oppress people with violence-there will be more protests,more strikes,more people on the street. This headline says it all. pic.twitter.com/yIiTYUjxKR

There have been ongoing protests at the university, for the past few months, against the sudden fee hike.

Most reports and victim accounts indicate that the masked mob was comprised of members of Akhil Bharatiya Vidyarthi Parishad (ABVP) – the all India right-wing students’ organization, affiliated to RSS (a Hindu nationalist volunteer organization). But there are some claims that it was the Left-wing students who allegedly attacked their own people.

There was a huge hue and cry about the alleged destruction of public property by students during the protests and subsequent police lathi-charge on students last month in other universities.

Be it the mob or the police, the students who are protesting got attacked. Some may be of the opinion that at least the police had the right to contain the situation last month once it got ‘violent’. Maybe, maybe not. I think the force used by police in the universities against the students was overall excessive, simply because the onus on the trained and experienced police officers is slightly more than the students.

But this time, what were the police doing surrounding a university campus, where a mob (not just a couple of miscreants) armed with crude but dangerous weapons slipped inside, wreaked havoc for hours, destroyed public property, terrorized students in their hostels, and attacked students? 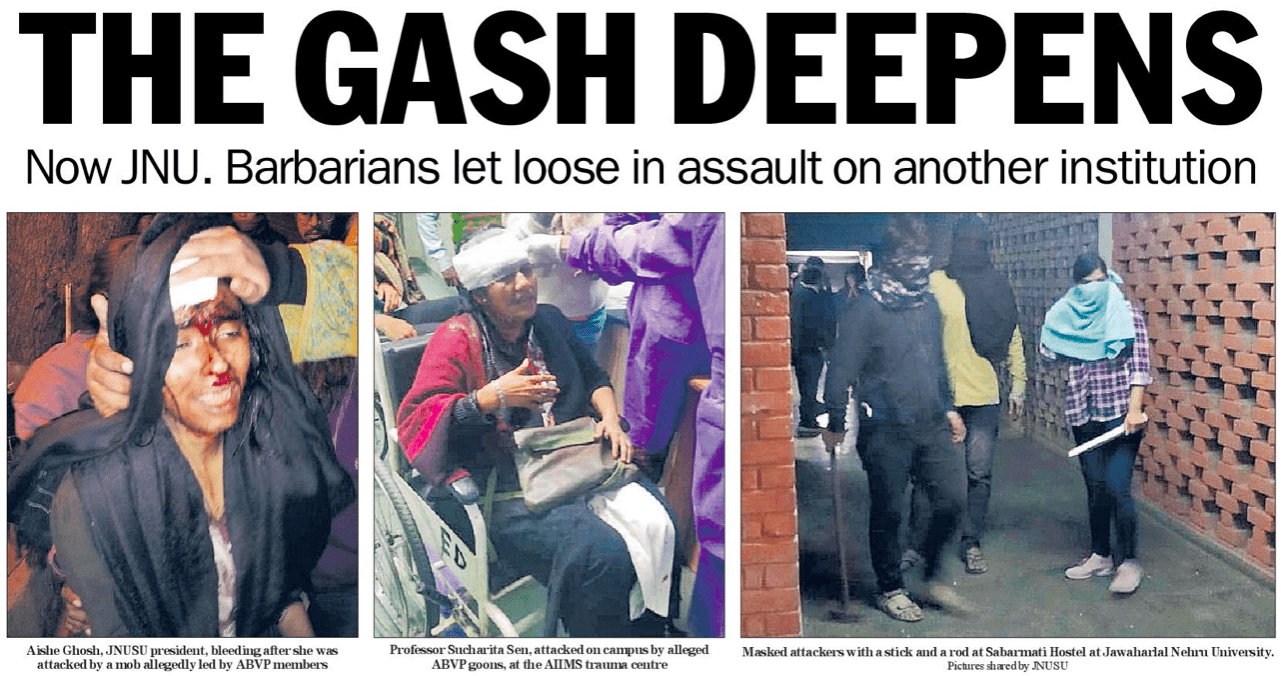 The present Indian government has been under a lot of scrutiny across the world for its polarising policies and actions. More importantly, the way the government is controlling the news, changing policies and narratives at the same time. Any criticism at all is met with silence or rejection and ridicule, or simply put a stop to.

The fact that Prime Minister Modi has not released any statement about the attacks which shook the whole country is unacceptable. Even if he cannot support the victims for their demands or political affiliations, the least a national leader could’ve done is to condemn the attacks on the students on university campuses!

The present government has been critical of the students of JNU for years for their involvement in politics and protests. In fact, in 2016, the student union president, along with some other students were charged with sedition, which was eventually dismissed by the court.

It appears the government is severely opposed to any criticism from students, intellectuals, public servants, ordinary citizens marching against its actions and policies.

But the rest of the country is coming together to display solidarity and compassion. Students, across the country, are coming out in support and marching in solidarity with the attacked students and university. Political parties, celebrities, intellectuals, ordinary citizens have condemned the attack and the inaction by the university administration and the police during and post the attack. 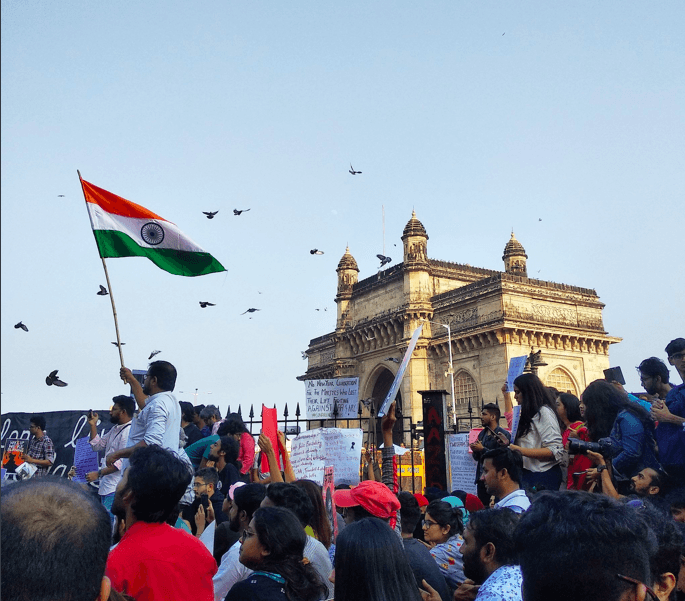 Student protests, students’ participation in politics, etc. are not a new thing. It has been part of India’s independence movement, its history. So asking universities to be detached from politics is impractical. If they are old enough to vote, they are old enough to be involved in politics. Violence is obviously not a solution, and freedom of speech is not a defense to spout filth,  from either side.

There have been some theories floating around that this incident is one in many to delay the upcoming elections in Delhi, India. For me, this seems like a page straight out of 1984 by G. Orwell! It seems to be all chaos and illogical power play.

Earlier today, the Delhi Police registered an FIR against JNUSU president Aishe Ghosh and 19 others for attacking security guards and vandalizing the server room a day before the Sunday violence on JNU campus. Ghosh was brutally hit on her head with an iron rod on Sunday. The people responsible for her injuries have vanished into thin air.

The FIR against the president of JNUSU is totally understandable . How dare she stop a nationalist , desh Premi iron rod with her head . These anti nationals don’t even let our poor goons swing a lathi properly . They always put their bodies there . I know they love to get hurt .

As for the government, it should develop a thicker skin and more accountability. It is working for the people who put them in office and is answerable to its people. They have criticized plenty when in opposition as they should have. Now it’s their turn to address the criticisms and do their job, instead of mere marketing campaigns!