The latest song video has just premiered from the upcoming film “Panga” starring Kangana Ranaut along with singer/actor Jassie Gill who sings on the new track ‘Dil Ne Kaha.’ “Panga” opens in theaters across North America next Friday, January 24th. 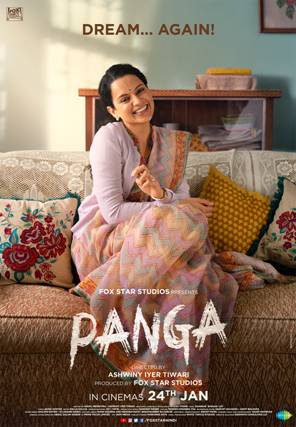 ‘Dil Ne Kaha’ shares a glimpse of the chemistry between Ranaut’s Jaya Nigam and Gill’s Prashant. The song shares a flashback into the couple’s lives on how they began dating, and what led to their marriage. From sneaking out of college to long bike rides in the night, we see the duo paint the town red. ‘Dil Ne Kaha’ seems a complete earworm, with charming undertones, which make it come across as a soft romantic ballad.

Watch the video for the title track here:

Director, Ashwiny Iyer Tiwari has brought together the cast of Kangana Ranaut, Jassie Gill, Richa Chadda, Neena Gupta, and Yagya Bhasin in a movie that is sure to win hearts.

Rooted in the subculture of societal facts “Panga” is an emotional roller coaster tale of a middle-class Indian woman; a forgotten kabaddi world champion who catalyzes an inner desire to give a new meaning to her existing role as a wife and mother and takes an ingenious decision to come back to the sport despite the challenges of age stereotypes and a new generation complexities which creates an upheaval in her life as she is torn between family responsibility and love for the sport.