Valentine’s Day is around the corner, and this holiday created by the greeting card industry isn’t just for romance. You can celebrate all kinds of love from loving your parents to your best friends, who says you need a significant other to celebrate? This Valentine’s Day celebrate with your girlfriends! Celebrate Galentine’s Day! 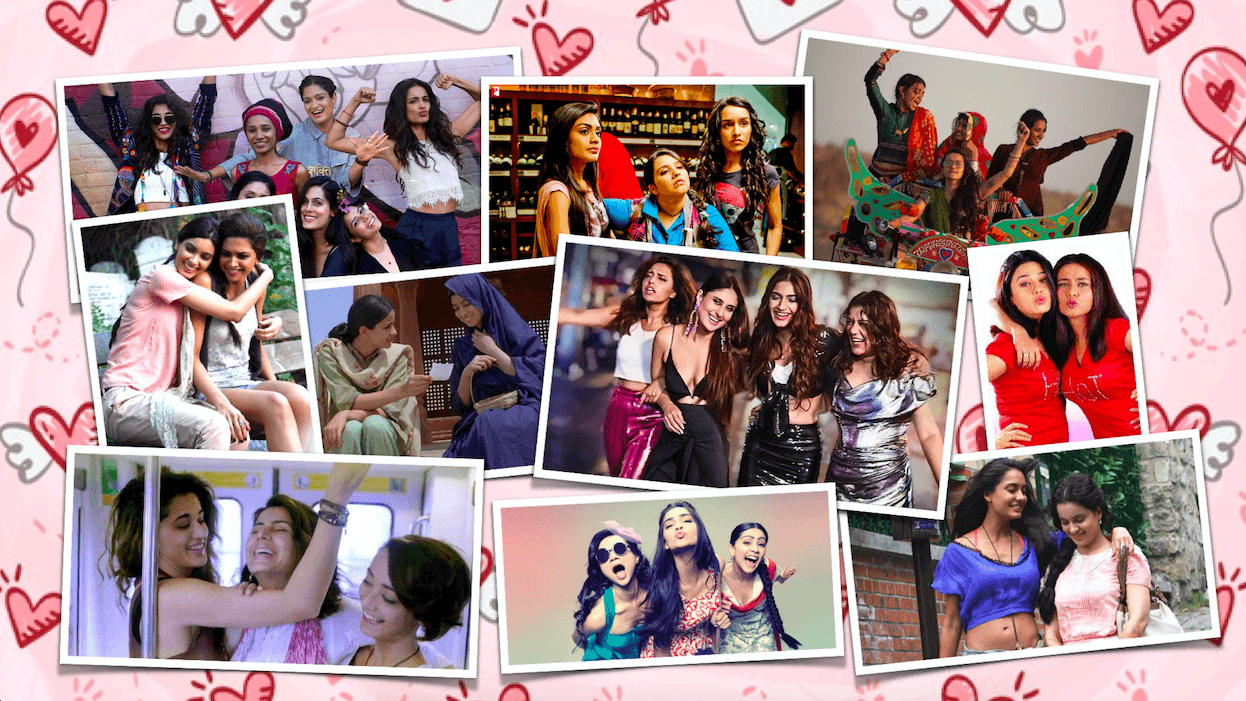 It’s always fun to have a night on the town soaking up the sights with drinks and good food with good friends. However, you can also have a low key night in with pizza, ice cream and a good binge of the best Bollywood has to offer on the topic of close girlfriends or women supporting women.

Make it a Galentine’s Day to remember with these female-centric films!

Kangana Ranaut and Lisa Haydon brought to life an empowering friendship in this film as Rani and Vidyalaxmi respectively. Left at the altar, bubbly, small-town Rani takes on the world by going on her honeymoon to Paris alone. She faces the world on her own and tackles the real world with the support and inspiration of Vidyalaxmi, an independent woman.

“Veere Di Wedding” is an epic girl gang flick featuring four stunning independent women who are at turning points in their life get away from it all to go on a fabulous bachelorette vacation. Their friendship and unconditional love for each other is what helps them face their fears because they have each other. It’s the perfect Galentine’s Day movie!

“Dor” is a stunning film that portrays the strength of female friendships when they have to stand up against the patriarchy and archaic social norms. The friendship between Gul Panag and Ayesha Takia’s characters in this film is a mature representation that was ahead of its time and before Galentine’s Day became famous.

“Angry Indian Goddesses” is just as its title represents, a story of powerful goddesses taking back their power. The film takes on topics like sex, love, revenge, family, and other aspects of life. Each character has her own story and personality, you’re bound to find someone that you connect with. They support each other through it all, and it was one of India’s first all-girl gang films.

“Parched” was a revolutionary film based on the lives of women living in rural Rajasthan, filled to the brim with misogyny, patriarchy, gender politics and hostility towards women. The film revolves around four main characters that reveal a side of the ordinary village girl that Bollywood had never seen. These close friends talk about men, sex, child marriage, dowry, and ambitions with a realistic approach which makes “Parched” so relatable.

“Aisha” was Bollywood’s answer to 90s chick flicks like “Clueless” that reveal a wholesome message through designer outfits, comedic mishaps, great girlfriends and a little romance. Sonam Kapoor and Ira Dubey’s friendship as Aisha and Pinky is based on Jane Austen’s novel, ‘Emma.’ Their sweet relationship shows us that no matter how many ups and downs there are, real friends, will always stick by your side.

“Pink” is more on the serious side but a powerful showcase of friendship. Three women, Minal Arora, Falak, and Andrea, believe and support each other during hard times. The three girls are sexually assaulted by three affluent men at a rock concert and a court case ensues where the girls are charged with being prostitutes. These strong friends took on the powerful men to protect each other.

“Luv Ka The End” is a hilarious chick flick about a gang of friends getting revenge on the guy who broke their friend’s heart. It’s a wild ride that will have you rolling on the floor laughing. This flick is actually Shraddha Kapoor’s first film, and the young star rocks as Rhea.

“Cocktail” is a unique story that epitomizes the statement sisters before misters. Deepika Padukone plays the wild child Veronica while Diana Penty is the sweet and simple desi girl Meera. These two opposites make an unlikely friendship and their love for each other leads them to sacrifice their love for the same man.

This classic film showcases how the love of two friends can take on any challenge and be closer than sisters. Rani Mukherjee and Preity Zinta play best friends Pooja and Janhvi. Jahnvi spends all her days caring for the comatose and paralyzed Pooja when she is injured and even sacrifices her love for Raj (Salman Khan). Little did she know that Pooja would sacrifice everything for her as well! Now that’s true Galentine’s Day love.