This new Netflix series was the thing to binge-watch this weekend with everyone under curfew or ‘shelter-in-place’ orders. The show starts with a bang. The first episode is very out there, has scenes you would never expect to see in mainstream Indian television and will have you appreciating the meticulously thought-out direction.

SHE is about Bhumi Pardeshi (Aaditi Pohankar), a Mumbai cop who belongs to a poor family and has an ailing mother and a brat of a younger sister as dependents. She’s a senior police constable who’s in the job not for a passion to protect lives, but for the money which feeds her family and pays for her mom’s medical bills.

She’s living a simple (read: boring) aimless life until luck changes and she’s recruited for an undercover operation to take down a major drug lord who has a weakness for prostitutes.

That’s where the story begins. Bhumi’s transformation from a lowly unattractive person to a sensual and bold (undercover) sex worker is breathtaking. The confidence with which Pohankar plays both roles is astonishing.

SHE by Netflix is not a feminist show and doesn’t revolve around women empowerment, at least not as we know it. On the contrary, it casually portrays a lot of the injustices against females in the Indian society, and openly objectifies Bhumi in the name of police work. If you are able to set aside the inappropriateness, you will begin to appreciate what I believe is the true brilliance of the show. 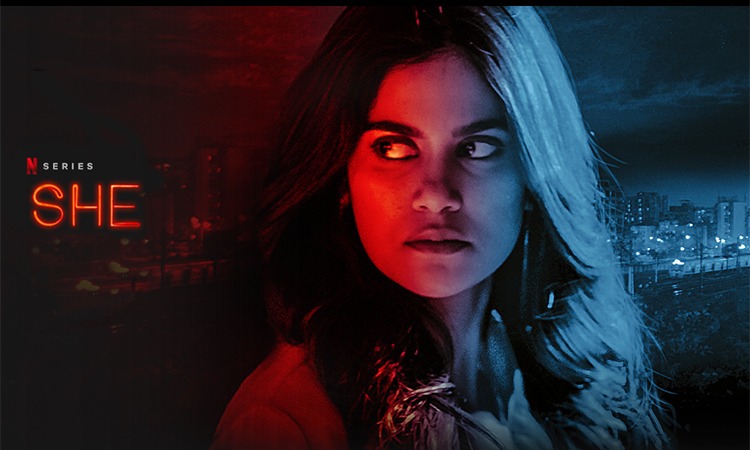 An ordinary woman with no apparent desires discovers something she didn’t know she had – her sexuality. Because of the flawed society Indians live in, most women end up burying their sexual desires deep within. Bhumi’s journey in discovering her attractiveness hidden under the oversized maxi dresses is something a lot of women in India can relate to, whether they admit it or not. The pleasure Bhumi finds in men suddenly finding her attractive is what empowers her as a woman and even as a cop.

Producer and writer, Imtiaz Ali, makes a good attempt at creating a masterpiece, but while the first season starts strong, it leaves viewers disappointed with how it ends. The last episode takes an unexpected turn with a loose hook to the next season and the ending was arbitrary, to say the least.

This show is ‘Mrs. Fletcher’ (HBO) meets ‘Breaking Bad’ (AMC) both in terms of exploration of one’s own sexuality and character transformation from one end of a spectrum to another. Overall, SHE is a very forward show, arguably progressive in some ways, and sets a strong precedence for future digital Indian television.