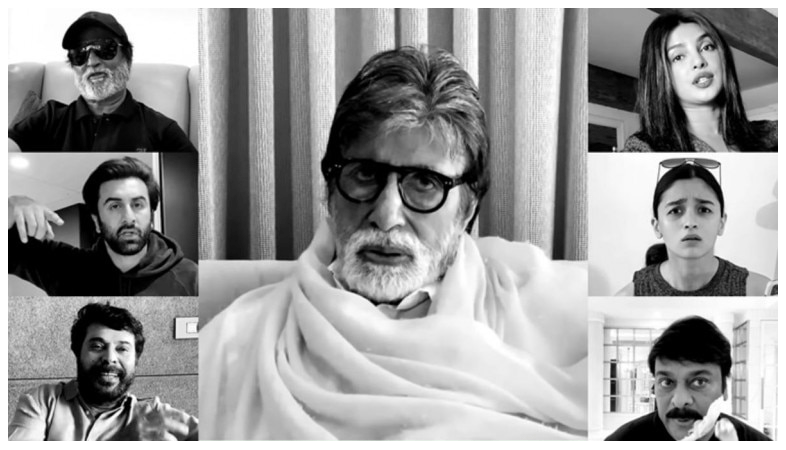 With some of the best creative minds in the industry in tow, the short film “Family,” which spreads awareness about the Coronavirus outbreak, released on Sony TV on Monday and has been trending ever since. The film, which talks about the importance of staying indoors in times of the COVID-19 pandemic, is a made-at-home short film featuring various actors from across India – Rajinikanth, Amitabh Bachchan, Mohanlal, Mammootty, Chiranjeevi, Priyanka Chopra, Ranbir Kapoor, Alia Bhatt, Prosenjit Chatterjee, Shiva Rajkumar, Sonalee Kulkarni, and Diljit Dosanjh – and it revolves around Amitabh Bachchan’s misplaced pair of dark sunglasses and everyone’s attempts to find it. Every actor shot their part of the film at their homes, respectively.

It is a minor crisis of sorts that sends the big multilingual family into a tizzy and the spectacles are finally found. The film ends with the old man observing that he did not actually need the glasses, as he cannot go out in the sun, presumably referring to being homebound during the pandemic.

At the end of the short film, Amitabh Bachchan called the Indian film industry a “Family” and said that the film fraternity would make donations to daily wage workers of the film industry, who are most affected by the coronavirus lockdown.

Sharing the video, Amitabh Bachchan Tweeted, “When you see that the cause is greater than the idea you dreamt of… There is just immense joy and gratitude for all my colleagues and friends in the making of this historic effort! We are one and we shall overcome!”

Despite its appearance, this short film, “Family” is more than a self-indulgent joke by elderly superstars and their spunky young colleagues. It is a short and effective message directed towards fellow citizens, urging them to self-isolate during the coronavirus pandemic.