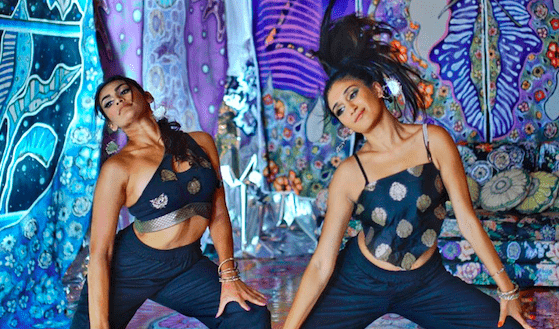 We got the perfect way to celebrate International Dance Day today with ‘Don’t Phunk With My Dil’ by Meghna Chakraborty & Saleena Khamamkar!

As lovers of dance, music, and culture, they grew up listening to the hit Bollywood songs that filled desi households all over the world, as well as the chart-busting American pop songs on their local radio stations. They connected with both genres, and as dancers, they were always fascinated by the music videos and performances by leading female artists.

When The Black Eyed Peas’ track ‘Don’t Phunk with My Heart’ was released in 2005, Meghna & Saleena were young girls struck by the musicality and star power. Something sounded familiar and they distinctly remembered reading the name “Asha Bhosle” in the credits of the CD cover. Bhosle, one of the most popular Bollywood singers of all time, was featured in a Black Eyed Peas album? Their worlds were colliding! The intro of ‘Don’t Phunk with my Heart’ was sampled from an iconic Bollywood song ‘Yeh Mera Dil,’ which was originally sung by Bhosle in the movie “Don” (1978).

It gave them a sense of pride that a popular American record had a prominent Hindi music influence. Fast forward 15 years, and they decided to pay tribute to these two iconic tracks with a concept video that illustrates their unique identities as 21st century South Asian-American women.

This special dance project called ‘Don’t Phunk With My Dil’ bridges the East and West and pays homage to decades of world music. In this female empowerment anthem, Megha and Saleena take a trip back to the 70s and early 2000s, channeling American pop star Fergie and classic Bollywood heroine Helen in a mix of two iconic songs: ‘Don’t Phunk With My Heart’ and ‘Yeh Mera Dil.’

The video follows two friends getting ready for a night out when a phone call from a toxic lover interrupts. What follows is a spunky fusion of Indian and jazz choreography that reflects the message: ‘Don’t Phunk With my Dil!’

Born in California and raised in Las Vegas, Nevada, Saleena Khamamkar is an accomplished dancer and choreographer. She has practiced contemporary, jazz, and Bollywood since the age of 3 and has been classically trained for 12 years by Smt. Kalashri Asha Gopal from the Arathi School of Dance in Bharatanatyam.

Achievements include multiple pageant titles (including Miss Glitterati 2011, Miss Teen India America 2012, and Miss India Globe 2013), a feature in the movie “Miss India America” on Netflix, a feature in a nation-wide Degree Deodorant commercial, a performance at MetLife Stadium with BhangraFunk at IIFA 2017, and a week-long Bharatanatyam tour of South India. Saleena was on UCSD Zor for 4 years, one of which she was a captain, choreographer, and female lead. Saleena studied Human Biology, Dance, and Biological Anthropology at the University of California, San Diego.

Saleena has since moved to Los Angeles as a professional dancer and choreographer. She is a company dancer at Karmagraphy, tour dancer for Aatma Performing Arts’ international show: Mystic India, worked for RRB Dance Company, featured in YouTuber Lilly Singh’s videos, and teaches Bollywood at various elementary schools. Saleena has a passion for choreography and fusing all her dance training into a unique dance style. Staying true to dance as an art form and balancing the ever-changing dance community is important to her.

Meghna Chakraborty is a Los Angeles-based dancer and choreographer with over 19 years of experience. She began training in Indian Classical Dance at the age of four and has also trained in Bollywood and Hip Hop. She completed her solo dance debut in Bharatanatyam at the age of 11 and went on to perform and compete in India, Spain, and all over the United States. She danced with the award-winning collegiate team USC Zeher for two years, one of which she was Female Lead. Meghna graduated from the University of Southern California in 2019, where she studied Business Administration and Digital Studies.

Since 2016, Meghna has been working as a Company Dancer and Choreographer for Joya Kazi Unlimited, which specializes in Professional Bollywood Entertainment Services & Choreography. She has also worked with other LA-based artists and choreographers, and additional notable credits include the 2012 Barcelona International Dance Grand Prix, the renowned A Noise Within theater, the 2019 World Rhythms Festival, Outfest 2020, Arshad’s ‘Needles’ music video, and most recently in Mindy Kaling’s new Netflix show ‘Never Have I Ever.’ Meghna dances for singer-songwriter Nisha and will be featured in the upcoming virtual music festival World on Pause. Meghna also works in multicultural marketing in the entertainment industry, and she is passionate about diverse storytelling and cultural empowerment.

#TechTalksWithMelwyn – The Cutting Edge Is The Edge