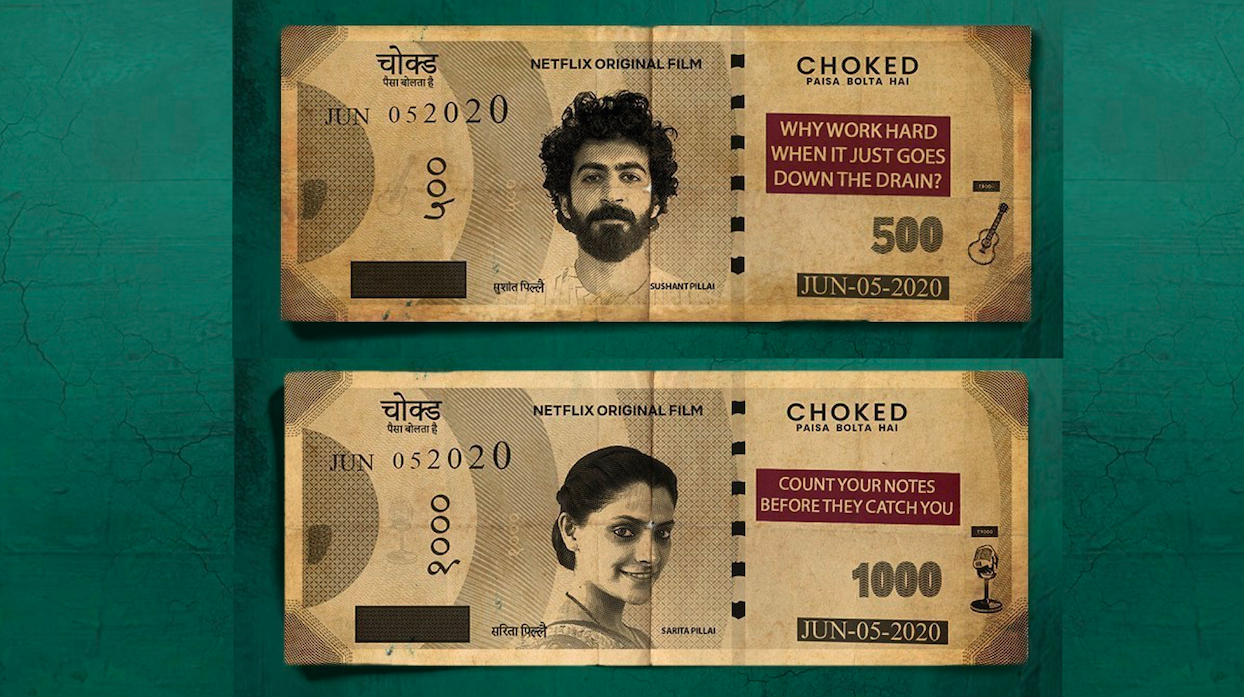 In November 2016, when India demonetized its Rs. 500 and Rs. 1000 notes overnight, the entire country went into a panic frenzy with people lining up outside banks to exchange their cash for several weeks to follow. Regardless of its intention, demonetization drastically impacted the lives of millions of people in the country. ‘Choked’ is one such (fictional) story in which a young woman Sarita Pillai (Saiyami Kher) thinks her life has changed for the better when she discovers a seemingly unlimited supply of cash in the drainpipe under her kitchen sink. Her hope for a better life is challenged when ‘demonetization’ is announced, and she has to find a way to continue reaping the benefit of her recent discovery.

Sarita is a middle-class wife and mother, whose dream of becoming a national singing sensation is crushed when she freezes on stage in the middle of a live singing competition. Her husband Sushant Pillai (Roshan Mathew) is an aspiring musician and out of work. To stay afloat and make ends meet, Sarita works at a bank while Sushant stays home but doesn’t prove much useful there either. With nosy neighbors such as Sharvari Taii (Amruta Subhash) in a building that’s falling apart, Sarita lives a mundane life until one night she discovers rolls of cash oozing out of the kitchen drain in her home. Deciding against telling her husband, Sarita chooses to use the money to buy new things for the house and expensive gifts for her friends and relatives.

How Sarita’s life is then impacted by demonetization is what is depicted in this new Netflix fictional drama directed by Anurag Kashyap and written by Nihit Bhave. Kher, Mathew, Subhash, and the rest of the cast have definitely done justice to their characters in “Choked.”

While the story is fresh and sensational, the movie lacks in terms of its slow pace and inability to keep viewers engaged and excited. The ending wasn’t well thought-out and felt more incomplete than open-ended. “Choked,” however, deserves acknowledgment for taking the lead on the topic of demonetization and will hopefully set the precedent for more and better content on the subject.