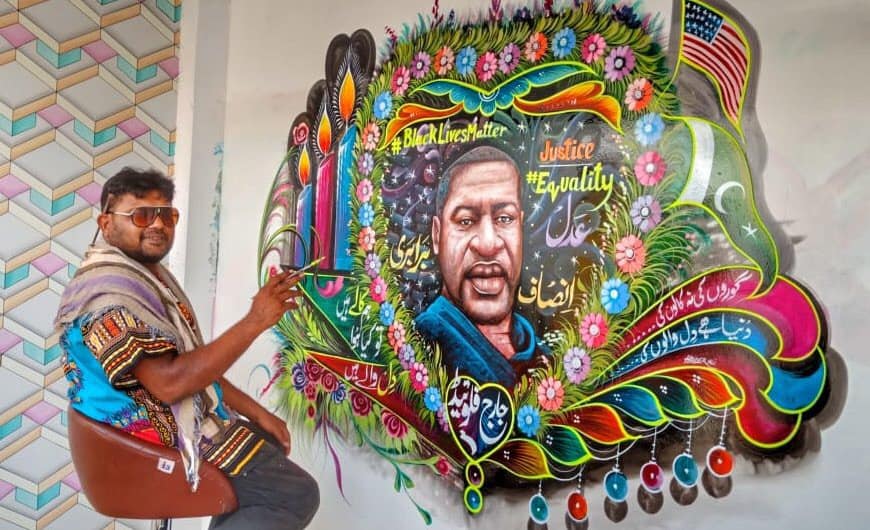 Numerous artists have used their craft to honor the Black Lives Matter movement and use their work to inspire and motivate. The latest to join this list of artists is Haider Ali, a prominent Pakistani truck artist and C.E.O. of Phool Patti, Pakistan’s Truck Art Team. 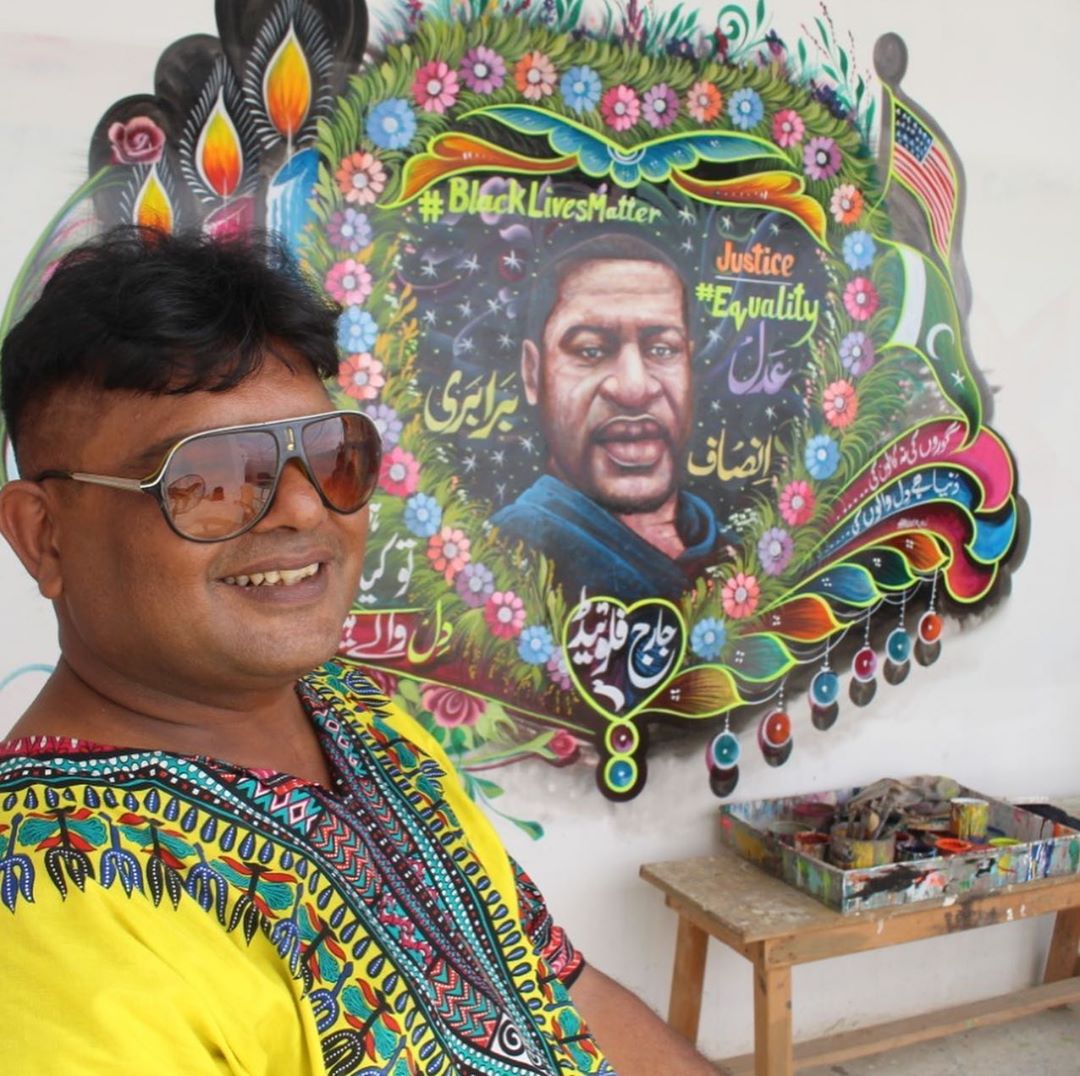 Ali created a beautiful piece that honors the late George Floyd and the Black Lives Matter movement. He painted the mural on the side of a home in Karachi, Pakistan. Phool Patti shared the piece with the caption “We are all the same, your cultural roots, gender, religion, or skin color doesn’t matter. #PhoolPatti is an exchange of love and peace,” in solidarity with George Floyd and the movement.

The mural has a black night sky with stars as the backdrop with George Floyd’s image as the main feature. Floyd’s image is surrounded by flowers, candles, the American and Pakistani flags, and meaningful quotes. The mural says “Hum kaaley hain tou kia hua, dil waley hain” which translates to “So what if we’re dark-skinned? We’ve got big hearts,”  and “Goron ki na kaalon ki, Dunya dil walon ki” which translates to “This world belongs neither to whites or blacks, only for those with big hearts.” 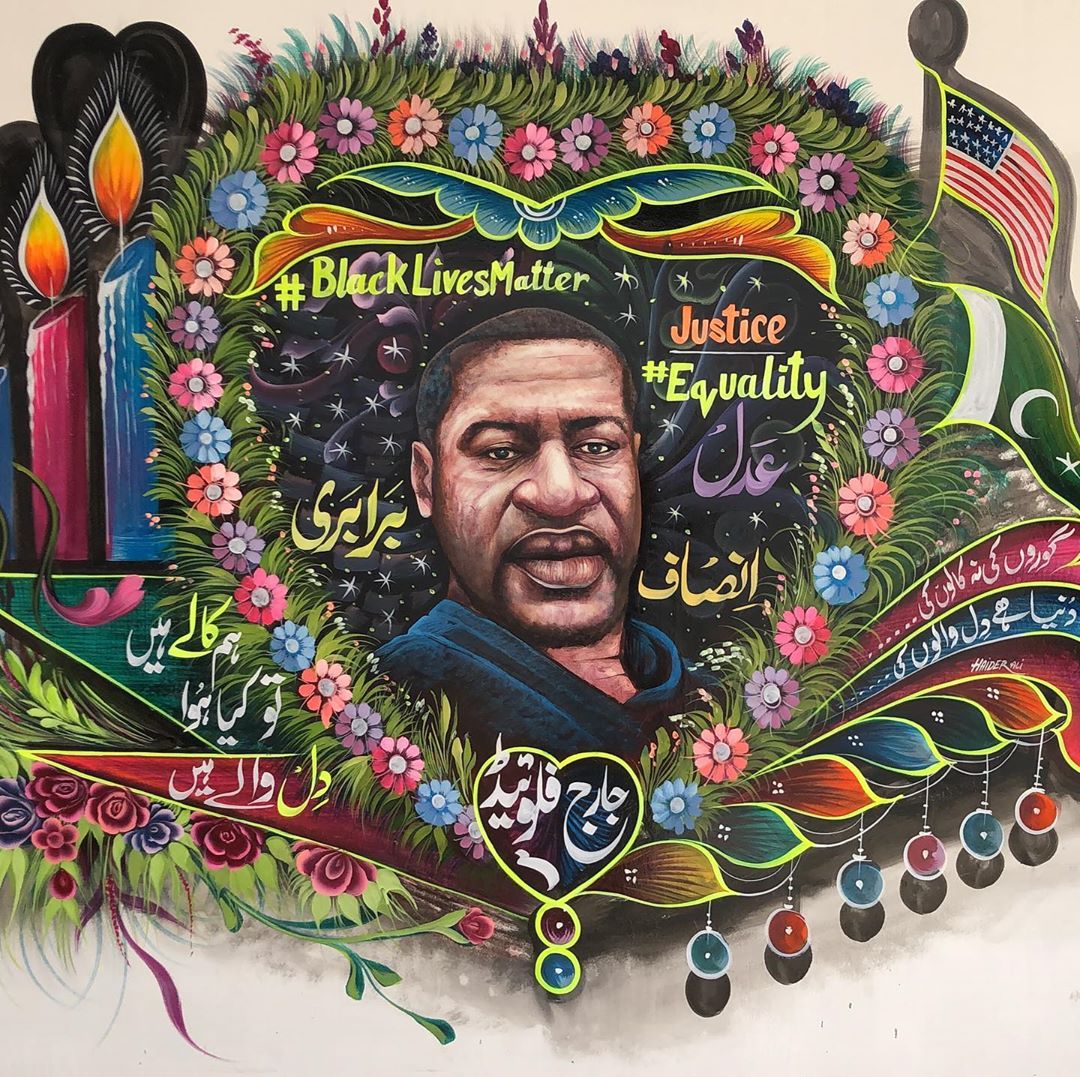 The story of Floyd’s death has sparked a fire across the world for people of color to stand up for justice. The death of the unarmed black man in Minneapolis has led to over 10 consecutive days of protests in America. Thankfully it has led to some changes and justice for Floyd but there is more work that needs to be done.

Ali was moved by the incident and felt for those who have been unjustly killed through police brutality.

“This act of barbarism makes me think of also the Muslims living in Indian Occupied Kashmir, Palestine, and Myanmar and elsewhere, what they have to go through every day?” Ali said in an interview. “They are subjected to injustice and cruelty on the basis of religious bias, tortured and killed. They are living their lives in fear every minute. I plead that the world must raise voice for them too.”

Ali’s work has been featured internationally in America and the United Kingdom at multiple art festivals honoring folk art. He is the CEO of Phool Patti, Pakistan’s Truck Art Team, an independent social enterprise that promotes truck art and is committed to preserving the folk art form that originated in Pakistan. The art form began with truck drivers taking the time to make their trucks stand out and over the years has expanded to decor for households and has been featured art exhibits. The truck artist team at Phool Patti uses their art to send positive messages and has brought more awareness to the truck art culture.