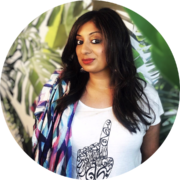 Born and raised in California, Sangeetha is a graduate of…

In a recent Valentine’s Day-themed photoshoot for superstar Rihanna’s lingerie line Savage X Fenty, a woman was shot wearing a revealing ensemble consisting of a corset, thong, and Cupid’s bow and arrow. I was shocked because the photos were shot in front of a house of worship – a Hindu temple to be exact.

The photoshoot is clearly rude and disrespectful to the Hindu religion as our temples are sacred structures carefully built very specifically to house Hindu divinities according to principles outlined in scriptures.

I’m the daughter of a temple builder (my father has built 3 temples in the US). Growing up, I saw how much love, respect, devotion, and careful planning and preparation it takes to build such a structure. To see a temple carelessly being used as a “pretty prop” for a photoshoot is beyond disrespectful. Would this kind of disrespect be tolerated if this model was posing clad like this in front of a church, synagogue, or mosque?

In October 2020 Rihanna had received backlash from the Muslim community on social media for using hadith, or sacred sayings of the Prophet (PBUH) in the Islamic tradition, in the music soundtrack of a Savage x Fenty lingerie show. She publicly apologized by saying that she was not aware that the song contained hadith and that it was an “honest” and “careless” mistake.

A huge thank you to social media accounts Hindu Samata & The American Hindu for creating awareness about this photoshoot and for rallying Hindus across the globe to ask for a formal apology from Rihanna and her creative team. The pictures have since been removed, but I sincerely hope that Rihanna goes beyond deleting posts and acknowledges the sacredness of our Hindu religion in the hope to create greater awareness. Rihanna also recently tweeted about her support of the Indian Farmer’s strike. If she is drawing attention to social causes in India, she should be respectful to the religious institutions of that country as well, regardless of faith.

The model in the photoshoot, Jhardan Reign formally apologized with the following Tweet.

The photos from my Cupid shoot have been taken down on all accounts. I again want to sincerely apologize for offending the Hindu community. It was never my intention and I have nothing but respect for your religion and culture. Thank you for speaking up. It won’t happen again.

She also stated that the photoshoot was her “own” and not the company’s, yet the photos appeared on the main Instagram and Twitter accounts of Savage x Fenty. These pictures went public the day LVMH (Fenty’s parent company) announced it was shuttering the fashion label after 2 years. Seems like karma!

Even if the model did the photoshoot on her own, the company should have been more responsible before sharing the same on their social media.

Perhaps Rihanna, as the face of Savage X Fenty, should also ‘talk about this’ just like she had done for the Muslim community.

The world of fashion is notorious for inherently racist practices and irresponsible appropriation of many indigenous, minority, and religious communities’ cultural and spiritual practices and signifiers. I have worked in the fashion industry for over 20 years and have been a firsthand witness to these damaging practices. For example, how many times have you seen a token Black, Asian, or Brown model posing with a White model who is placed in the foreground of a photo? POC bodies are NOT PROPS, and we should be given equal compensation, representation, and opportunities in the fashion industry! How many times have you seen white models shot in “exotic” locations such as Marrakesh or Jaipur wearing traditional clothing and accessories coined as “pretty?” Again, it is culturally-insensitive, rude, disrespectful, and inappropriate!

As a Hindu Chaplain at NYU, it frustrates me to see how my faith continues to be misrepresented in the west and our issues with representation and inclusion are not taken as seriously as the other Abrahamic faiths.

Hinduism is the oldest living religion in the world as well as the 3rd largest with 1.2 billion followers. The practices and cultures within it are extremely diverse and vary across the globe. I understand many do not know what my faith is, and the words “religion” and “religious” – especially in the United States – often conjures up associations with fanaticism and the extreme political right. Hinduism’s core principle is “EKAM SAT” meaning “all is one.” In other words, the spiritual paths are many, but faith is one!

All faiths, religions, schools of thought, and lifestyles are all equal, and all paths can lead one down a spiritual path towards upliftment and enlightenment. More importantly, Hinduism, at its philosophical heart, is accomodating of seemingly disparate and diverse interests. For example, it should be perfectly acceptable that I am and enjoy fashion (I’m a big fan of lingerie, I used to design for Victoria’s Secret). But this does not undermine my dedication to my Hindu prayer rituals and pujas.

I advise the world to do your research if you are “inspired” by a certain faith or by multiple faiths. RESEARCH! RESPECT! REPEAT!

In this digital age that we live in, I understand that many artists, PR agencies, and companies employ “controversial” tactics to generate hype and fame. But the collateral damage is mostly POCs of ethnic and religious minority communities. This has to stop now! As does the continued misappropriation of Hindu signifiers and sacred spaces and concepts – including mainstays of Western society such as Yoga, Namaste, Mantra, and “Chai Tea Latte.”

At the end of the day, I am a fan of Rihanna and Savage X Fenty. The issue is not about sex or sexy lingerie. It is about the concept and execution of this photoshoot. As the Muslim community worldwide rallied together quickly and swiftly, Hindus too should demand a formal apology from Rihanna and Savage x Fenty. Moving forward, I hope she and her company develop the same respect towards Hinduism instead of just doing the tired practice of deleting questionable content with no accountability. Let’s do better together!

Born and raised in California, Sangeetha is a graduate of Parsons School of Design, NYC based fashion/graphic/museum designer, interfaith chaplain, and an established gallery artist. She is the only person in the world doing this: A Hindu, Indian American woman who is an Islamic/Arabic Calligrapher! She hopes to bring her message of peace and education through art and design to a wider audience and demographic and to build a more understanding, just, compassionate world, and global change in thinking.