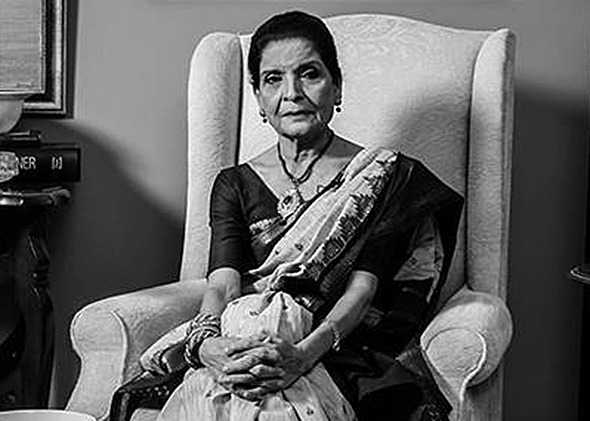 Pakistan’s first celebrity chef, Zubaida Tariq Ilyas, was best known for her totkay (household tips & tricks) and relatable personality. She passed away on January 4th, 2017 at Karachi after a prolonged battle with Parkinson’s disease. In 2011 she had published Living with Parkinson’s, a  day-to-day memoir of her life with the disease and shared her private moments with her readers.

She was in many ways Pakistan’s very own Martha Stewart! She was lovingly referred to as ‘Zubaida Aapa’ and she wrote several cookbooks and had popular cooking shows (both television and radio) like Dalda Ka Dastarkhawan, Aik Mukammal Ghar, Kitchen Magic, Aaj Ke Bhao and Handi, to her credit.

Known her since I was a little girl.. she was all heart, always. Rest In Peace Zubaida Khala.

Zubaida Tariq was born on April 4th, 1945, in Hyderabad, British India into a prominent family of intellectuals and artists, who later settled in Karachi, Pakistan. Her siblings are distinguished personalities of Pakistan in their own right – including famous play writer Fatima Surayya Bajiya, actor & writer Anwar Maqsood, poetess Zehra Nigah, and fashion designer Sughra Kazmi.

#ZubaidaAapa died, Forever young always meticulously dressed at her age loved her chorienan and her banarsi sarees she lived such a “bharpor life ,all dolled up till her last days May her soul Rest In Peace “Zubaida Appa k Kamal Totkay.” pic.twitter.com/ew2qq1F2EC

Zubaida Tariq started working as a celebrity chef much later in her life. Her initial stint with cooking started from the grand dinner parties held in the honor of her husband’s guests! After receiving many accolades from her guests, she considered cooking professionally. Initially, she worked in an advisory capacity and after that, she joined a spice company where she shared recipes of her own spices and other variations! She made her television debut in 1996 in her 50s with her much loved, first cooking show — Dalda Ka Dastarkhwan!

Her traditional appearance coupled with her totkays and other useful tips made her a revered maternal figure for the masses. Her death has left the entire nation grief-stricken and #ZubaidaApa started trending, whereby her fans and followers worldwide said their last goodbyes and paid their respects.

Rest in peace Zubaida Apa – we will hold on to your loving memory forever.