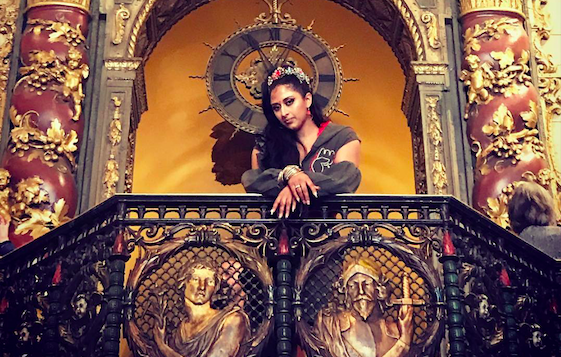 Raja Kumari was in New York City recently to launch the release of her second EP, “Bloodlines”. The rapper has been kicking up a storm in India and the States with her music, and this highly anticipated EP definitely delivers.

Kumari’s new EP is a 5-song project by Epic Records that features her hit, “Shook” which already surpassed 3 million views on YouTube. Critics have praised the artist for her music, including Time Magazine and The Los Angeles Times.

“Bloodline” is inspired by Kumari’s time in India. It represents her identity as an Indian American blending Indian classical music as well as Hinduism inspired music videos with her California girl upbringing. She calls these tracks her “battle anthems” that tell the story of her bloodline.

“BLOODLINE asks the question, ‘Who are you?’ It’s not just about your family line or your heritage. WHO ARE YOU?” Kumari said in a press statement regarding her EP. “What runs through your veins and what are you willing to fight for? This collection of songs was inspired by my time in India. I found strength in the Motherland, and these battle anthems are my story, my bloodline.”

Kumari, born Svetha Rao, is a Grammy award nominated songwriter who made a name for herself in the American music industry working with the likes of Gwen Stefani and Iggy Azalea before launching her own music career.

She also recently released the first episode of her new Apple Music Beats 1 Show, “The New India” where she highlights unique talents in India. The first episodes rappers Divine, Raftaar, and Nucleya as they chat about the changing hip hop scene in India.

Currently, she is on a tour promoting the new EP. Being one of the only female rappers of Indian descent, Kumari is an inspiration and a talent not to be messed with. Her drive to reach the top has empowered so many, needless to say, the Queen is ready to sit on her throne.