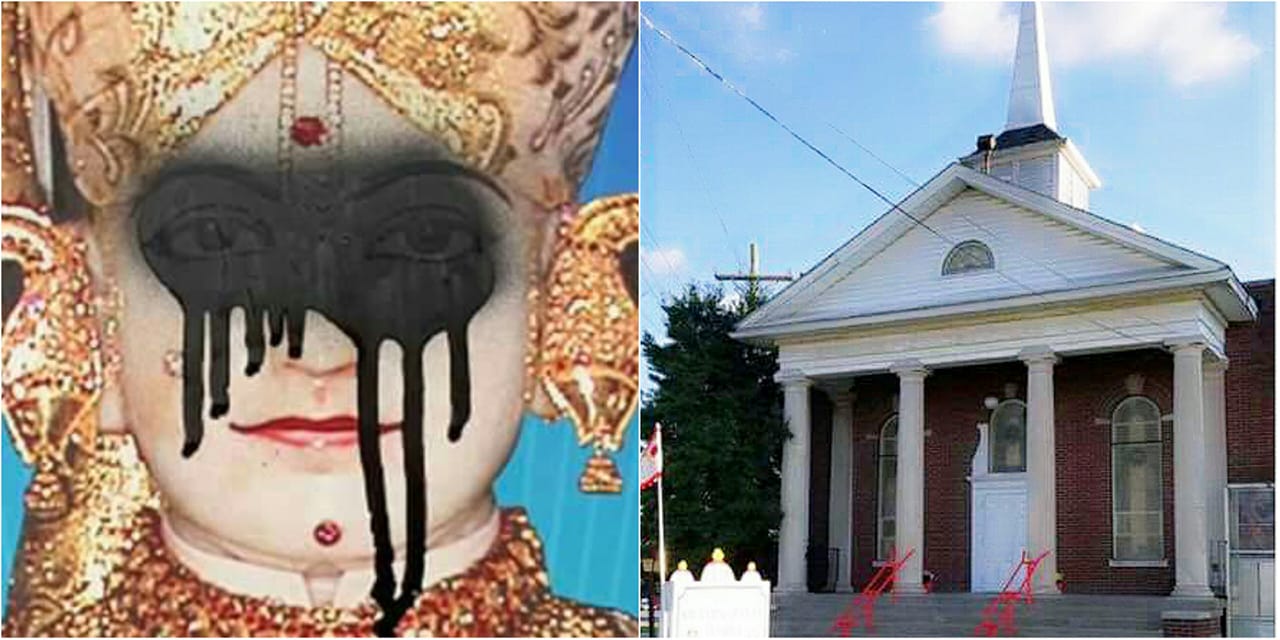 Louisville, KY is known for its “Festival of Faiths,” which is an annual interfaith conference that promotes interreligious understanding all across the country. When the news of vandalism of a Hindu temple broke it was alarming. Yet, in a bittersweet turn of events, the local community members of different faiths came together to clean the vandalized Hindu temple.

According to the Courier-Journal reports, last week vandals broke through a window at Louisville’s Swaminarayan Temple. The vandals shattered the glass, spray painted a poster of a religious figure, plunged a knife in the chair of  a temple, painted the temple walls with black crosses and phrases like “Jesus Is The Only Lord” and “Jesus Is All Mighty.”

The police arrested a 17-year-old boy for the vandalism. During a press conference, the Louisville Metro Police Chief Steve Conrad  called the act a “hate crime.” He called the desecration of the temple heartbreaking and assured the community that the police will do all that is necessary to ensure of the people.

“We at HAF are shocked but sadly not surprised by this ugly incident of vandalism,” the Hindu American Foundation said in a statement, “apparently by Christian supremacists unable to tolerate minority faiths in Louisville.”

Sadly, this is not an isolated incident, in 2015, anti-Islam messages were written in the  Louisville Islamic Center and many people had also come out then to paint over the graffiti.

According to the Pew Research Centre, the majority of the state community identifies as Christian, and less than 2% of them are of non-christian faiths. But this has not dampened the spirit of love and support in the community. There has been an outpour of sympathy and support from the community of all faiths including Christians, Muslims, Jewish, other interfaith groups.

The turnout of hundreds of people armed with cleaning supplies, ready to clean up the scene of hate crime helped set an example of unity for the community. The number of volunteers was so high that they ended up sprucing other parts of the temple as well.

“We may not have as much work as the number of people here, but we will make sure we do our best to make sure everyone gets a chance to have some paint to erase the hate,” said temple spokesperson Raj Patel. “We’ve repaired more than what we needed to, from a building perspective. We’ve repaired the hope and hearts of everyone. Anyone is welcome to come to our temple any time they want. They’ll feel welcome. They’ll be fed. That’s our philosophy and we’ll do that.”

While hate crime has been on the rise in the past few years, with a spike of 17% in 2017, according to FBI data, it has also seen the unity of people. There have been a few individuals or groups behind perpetrating hate crimes against people of different faiths, background or religion, but they have been largely condemned by the communities.

The Trump era has seen, protests and rallies against minorities of color, faith, and nationality. What these hatemongers must realize is that their actions only help bring the rest of the communities together. As the temple spokesperson Mr. Patel, rightly said at the press conference, “A lot of our religions are all the when it comes down to it. The common foundation is to be good to others.”

The message to take away from this incident is to focus on the solidarity and unity of the community, rather than the hateful vandalism of a misguided teen.

Sikh Female Trucker Breaking Gender Stereotypes In The US