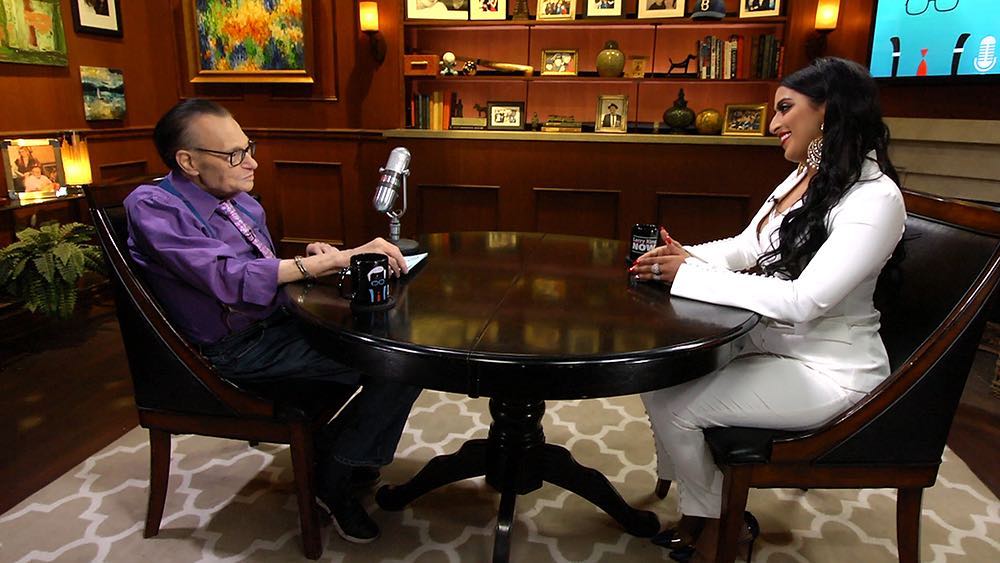 Indian American diva, Raja Kumari is a woman of many talents, from songwriter and dancer to recording artist. She’s worked with the likes of Timbaland, Gwen Stefani, and A.R. Rahman. She was even nominated for a Grammy for writing a song for Iggy Azalea!

It’s no surprise she was recently featured on the legendary late-night host, Larry King’s new show “Larry King Now.” Kumari spoke passionately about sharing her Indian American identity and her Indian culture through her album “Bloodline.” Kumari describes her latest album as a compilation of “battle anthems.”

On the show, Kumari spoke of her days as a trained dancer. She has studied Indian classical dance forms and gained popularity performing under her real name, Svetha Rao. When she began her career as a rapper she took on the avatar of Raja Kumari because she didn’t want to be known as just a dancer. Her stage name, which means “the daughter of the king,” is fitting to her persona of a fierce musical goddess.

Art is often a way to bridge the gap between cultures, which is what Kumari aims to do through her rhymes. Through her music, she creates a dialogue between the Western world she grew up in and her Indian culture. She lives ‘in the air’ as she puts it, on planes, and takes the time to write songs on the long flight journeys. In the interview, Kumari tells King how she is constantly in the studio and is performing at numerous concerts. She is also excited about her association with the fitness brand Adidas.

Kumari even dropped some personal tidbits about herself that reflected her Indian-American identity, like her love for mangoes and Bollywood’s dancing diva, Madhuri Dixit as well as a passion for snowboarding and growing up as a fan of Lauryn Hill. Kumari revealed that, like so many Indian parents, her parents were not quite supportive of her music career, they did not quite understand it. However, they have since come around to their daughter’s choice.

An intriguing interview where Kumari reveals the many facets of herself, you can’t miss it! Check out the full interview here.