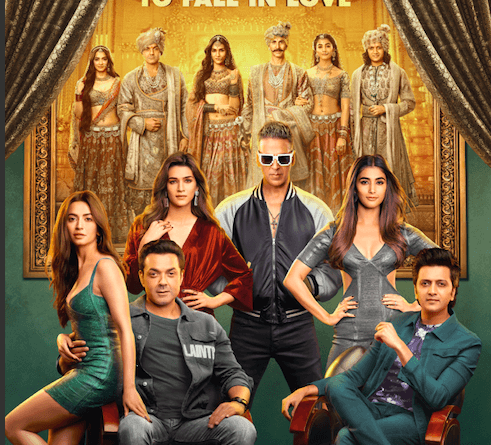 Akshay Kumar packs 600 years of laughter into one giant Diwali gift with the release of his much-anticipated comedy “Housefull 4” which crashes into North American theaters on October 25th.

When 6 lovers are parted because of an evil conspiracy and revenge in the era of 1419, they cross paths once again in 2019.

However, in the present life the 3 boys fall in love with the wrong women and are about to marry their sisters-in-law.

As destiny would have it history repeats itself when the 3 couples land up in Sitamgarh once again, where it all began. Will they remember their past lives in time for marriage or will they be stuck with the wrong lovers forever?

“Housefull 4” is coming to confuse you, put you on a laughing riot and take you through the grandeur of 1419 with a spark of 2019.

The three minute thirty six seconds trailer takes you on a laughter ride! It begins in a fictitious place called Sitamgarh where the yesteryears’ characters lived their past lives. Later, we see Akshay’s present character suddenly reminiscing all the events, and begins a journey to find his bride Kriti Sanon aka Madhu.

He also informs the same to Riteish and Bobby’s present characters to find their true love – Kriti Kharbanda and Pooja Hedge. While watching the trailer you might also observe that the makers have also taken a few references from the films like “Padmaavat”, “Bajirao Mastani”, “Bahubali”,”Kick” and “No Entry”.

“Housefull 4” is a special film especially for all Akshay Kumar fans because the actor is returning to the comedy genre after three years. Directed by Farhad Samji, the film also stars Rana Daggubati, Chunkey Panday, Saurabh Shukla, Johnny Lever, Jamie Lever, among others.