The new year brings a brand new poster and a new video for the title song of Deepika Padukone’s much anticipated next film “Chhapaak” which opens in North American theaters next Friday, January 10th. The wildly popular trailer has amassed over 41 million YouTube views beating out trailers for Hollywood’s upcoming blockbusters including Black Widow (38M), Wonder Woman 1984 (24M), the James Bond film No Time To Die (12M), and Tom Cruise’s Top Gun: Maverick (11M). As a member of the Academy, Deepika Padukone will be voting on the Oscars and is already winning early praise for her performance in “Chhapaak” for next year’s global awards season. 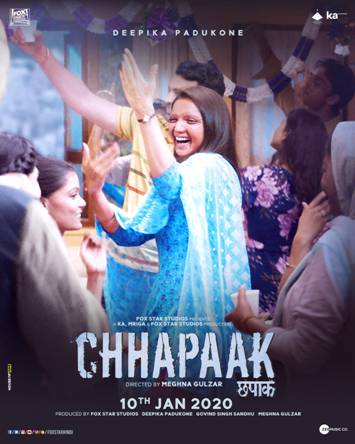 The title song for Deepika Padukone’s upcoming film Chhapaak was released online on Friday. The song shows her character Malti’s journey of rising above pain and trauma to become the face of empowerment and strength.

The song is sung by Arijit Singh, composed by Shankar Ehsaan Loy and the lyrics are penned by Gulzar. Talking about the song at the launch event, Deepika called it the soul and thread of the film that binds it together. “Whenever I listen to this song, I get goosebumps,” Deepika said. She was joined by Laxmi Agarwal at the launch, an acid attack survivor and activist whose story inspired the film.

Laxmi was attacked in 2005 at the age of 15. Laxmi had to undergo several surgeries and later, she took up the job of helping acid attack survivors and promoted campaigns to stop such attacks.